Japan used seawater to cool nuclear fuel at the stricken Fukushima-Daiichi nuclear plant after the tsunami in March 2011 -- and that was probably the best action to take at the time, says Professor Alexandra Navrotsky of the University of California, Davis.

But Navrotsky and others have since discovered a new way in which seawater can corrode nuclear fuel, forming uranium compounds that could potentially travel long distances, either in solution or as very small particles. The research team published its work Jan. 23 in the journal Proceedings of the National Academy of Sciences.

"This is a phenomenon that has not been considered before," said Alexandra Navrotsky, distinguished professor of ceramic, earth and environmental materials chemistry. "We don't know how much this will increase the rate of corrosion, but it is something that will have to be considered in future."

Japan used seawater to avoid a much more serious accident at the Fukushima-Daiichi plant, and Navrotsky said, to her knowledge, there is no evidence of long-distance uranium contamination from the plant.

Uranium in nuclear fuel rods is in a chemical form that is "pretty insoluble" in water, Navrotsky said, unless the uranium is oxidized to uranium-VI -- a process that can be facilitated when radiation converts water into peroxide, a powerful oxidizing agent.

Peter Burns, professor of civil engineering and geological sciences at the University of Notre Dame and a co-author of the new paper, had previously made spherical uranium peroxide clusters, rather like carbon "buckyballs," that can dissolve or exist as solids.

In the new paper, the researchers show that in the presence of alkali metal ions such as sodium -- for example, in seawater -- these clusters are stable enough to persist in solution or as small particles even when the oxidizing agent is removed.

In other words, these clusters could form on the surface of a fuel rod exposed to seawater and then be transported away, surviving in the environment for months or years before reverting to more common forms of uranium, without peroxide, and settling to the bottom of the ocean. There is no data yet on how fast these uranium peroxide clusters will break down in the environment, Navrotsky said.

How seawater could corrode nuclear fuel 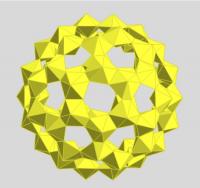