Leaping lizards have a message for robots: Get a tail!

University of California, Berkeley, biologists and engineers including undergraduate and graduate students studied how lizards manage to leap successfully even when they slip and stumble, and found that swinging the tail upward is the key to preventing a forward pitch that could send them head-over-heels into a tree.

The scientists subsequently added a tail to a robotic car they named Tailbot and discovered that it's not as simple as throwing your tail in the air. Robots and lizards have to adjust the angle of their tail just right to counteract the effect of the stumble. Given an actively controlled tail, even robots can make a leap and remain upright.

"We showed for the first time that lizards swing their tail up or down to counteract the rotation of their body, keeping them stable," said team leader Robert J. Full, UC Berkeley professor of integrative biology. "Inspiration from lizard tails will likely lead to far more agile search-and-rescue robots, as well as ones having greater capability to more rapidly detect chemical, biological or nuclear hazards."

Agile therapod dinosaurs like the velociraptor depicted in the movie Jurassic Park may also have used their tails as stabilizers to prevent forward pitch, Full said. Their tail movement is illustrated in a prescient sequence from the 1993 movie in which the animated animal leaps from a balcony onto a T. rex skeleton while chasing the lead characters.

"Muscles willing, the dinosaur could be even more effective with a swing of its tail in controlling body attitude than the lizards," Full said.

Full and his laboratory colleagues, including both engineering and biology students, will report their discoveries online on Jan. 5 in advance of publication in the Jan. 12 print edition of the journal Nature. The paper's first author, mechanical engineering graduate student Thomas Libby, also will report the results on Jan. 7 at the annual meeting of the Society for Integrative and Comparative Biology in Charleston, South Carolina.

From gecko toe hairs to tails

Full's research over the past 20 years has revealed how gecko toe hairs allow the animals to climb smooth vertical surfaces and, more recently, how their tails help keep them from falling when their feet slip and allow them to right themselves in mid-air. The research reported this week shows how the tail is used in leaping, providing inspiration for robots that can deal with tumbles that are inevitable if, for example, they are exploring rubble during search and rescue operations.

The new research tested a 40-year-old hypothesis that the two-legged theropod dinosaurs the ancestors of birds used their tails as stabilizers while running or dodging obstacles or predators. In Full's teaching laboratory, students noticed a lizard's recovery after slipping during a leap and thought a study of stumbling would be a perfect way to test the value of a tail.

In a research-based teaching lab associated with UC Berkeley's Center for interdisciplinary Bio-inspiration in Education and Research (CiBER), Full and his students used high-speed videography and motion capture to record how a red-headed African Agama lizard handled leaps from a platform with different degrees of traction, from slippery to easily gripped sandpaper.

They coaxed the lizards to run down a track, vault off an obstacle and land on a vertical surface with a shelter on top. When the friction on the obstacle was reduced, lizards slipped, potentially causing their body to spin out of control.

When the researchers saw how the lizard used its tail to counteract the spin, they created a mathematical model as well as Tailbot to better understand the animal's skills. With a tail but no feedback from sensors about body position, Tailbot took a nose dive when driven off a ramp, which mimicked a lizard's take-off. When body attitude was sensed and fed back to the tail motor, however, Tailbot was able to stabilize its body in midair. The actively controlled tail effectively redirected the angular momentum of the body into the swing of the tail, just as with leaping lizards, Full said.

Tailbot's design pushed the boundaries of control in robotics in an area researchers call inertial assisted robotics, Full said, which drew the attention of attendees at last October's meeting of the International Conference on Intelligent Robots and Systems. Their paper, presented by Libby and fellow mechanical engineering graduate student Evan Chang-Siu, was one of five finalists in a field of more than 2,000 robot studies presented at the meeting.

"Engineers quickly understood the value of a tail," Libby said, noting that when he dropped Tailbot nose-down, it was able to right itself before it had dropped a foot. "Robots are not nearly as agile as animals, so anything that can make a robot more stable is an advancement, which is why this work is so exciting."

Full and his students are now investigating the role of the tail in controlling pitch, roll and yaw while running.

"This paper shows that research-based teaching leads to better learning and simultaneously can lead to cutting-edge research," Full said. "It also shows the competitive advantage of interdisciplinary approaches and how involvement of undergraduates in research can lead to innovation."

"Learning in the context of original discovery, finding out something that no one has ever know before, really motivated me," wrote former UC Berkeley integrative biology undergraduate Talia Moore, now a graduate student in the Department of Organismic and Evolutionary Biology at Harvard University. "This research-based lab course ... showed me how biologists and engineers can work together to benefit both fields."

The work was funded by the National Science Foundation, including NSF's Integrative Graduate Education and Research Traineeship (IGERT) program, and the Micro Autonomous Systems Technologies (MAST) consortium, a large group of researchers funded in part by the U.S. Army Research Laboratory that is focused on creating autonomous sensing robots. 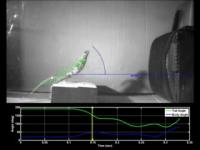