Led by researchers at the University of California, San Diego School of Medicine, scientists have, for the first time, created stem cell-derived, in vitro models of sporadic and hereditary Alzheimer's disease (AD), using induced pluripotent stem cells from patients with the much-dreaded neurodegenerative disorder.

"Creating highly purified and functional human Alzheimer's neurons in a dish - this has never been done before," said senior study author Lawrence Goldstein, PhD, professor in the Department of Cellular and Molecular Medicine, Howard Hughes Medical Institute Investigator and director of the UC San Diego Stem Cell Program. "It's a first step. These aren't perfect models. They're proof of concept. But now we know how to make them. It requires extraordinary care and diligence, really rigorous quality controls to induce consistent behavior, but we can do it."

The feat, published in the January 25 online edition of the journal Nature, represents a new and much-needed method for studying the causes of AD, a progressive dementia that afflicts approximately 5.4 million Americans. More importantly, the living cells provide an unprecedented tool for developing and testing drugs to treat the disorder.

"We're dealing with the human brain. You can't just do a biopsy on living patients," said Goldstein. "Instead, researchers have had to work around, mimicking some aspects of the disease in non-neuronal human cells or using limited animal models. Neither approach is really satisfactory."

Goldstein and colleagues extracted primary fibroblasts from skin tissues taken from two patients with familial AD (a rare, early-onset form of the disease associated with a genetic predisposition), two patients with sporadic AD (the common form whose cause is not known) and two persons with no known neurological problems. They reprogrammed the fibroblasts into induced pluripotent stem cells (iPSCs) that then differentiated into working neurons.

With the in vitro Alzheimer's neurons, scientists can more deeply investigate how AD begins and chart the biochemical processes that eventually destroy brain cells associated with elemental cognitive functions like memory. Currently, AD research depends heavily upon studies of post-mortem tissues, long after the damage has been done.

"The differences between a healthy neuron and an Alzheimer's neuron are subtle," said Goldstein. "It basically comes down to low-level mischief accumulating over a very long time, with catastrophic results."

The researchers have already produced some surprising findings. "In this work, we show that one of the early changes in Alzheimer's neurons thought to be an initiating event in the course of the disease turns out not to be that significant," Goldstein said, adding that they discovered a different early event plays a bigger role.

The scientists also found that neurons derived from one of the two patients with sporadic AD exhibited biochemical changes possibly linked to the disease. The discovery suggests that there may be sub-categories of the disorder and that, in the future, potential therapies might be targeted to specific groups of AD patients.

Though just a beginning, Goldstein emphasized the iPSC-derived Alzheimer's neurons present a huge opportunity in a desperate fight. "At the end of the day, we need to use cells like these to better understand Alzheimer's and find drugs to treat it. We need to do everything we can because the cost of this disease is just too heavy and horrible to contemplate. Without solutions, it will bankrupt us - emotionally and financially."

A patent application has been filed on this technology by the University of California, San Diego. For more information, go to: http://techtransfer.universityofcalifornia.edu/NCD/22199.html 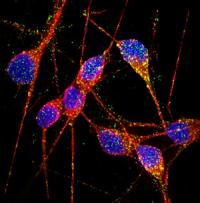