Dogs with spinal cord injuries may soon benefit from an experimental drug being tested by researchers at the University of California, San Francisco (UCSF) and Texas A&M College of Veterinary Medicine & Biomedical Sciences -- work that they hope will one day help people with similar injuries.

Funded through a three-year, $750,000 grant from the U.S. Department of Defense, the drug to mitigate damage has already proven effective in mice at UCSF. Now the Texas team will test how it works in previously injured short-legged, long torso breeds of dog like dachshunds, beagles and corgis, who often suffer injuries when a disk in their back spontaneously ruptures, damaging the underlying spinal cord.

About 120 dogs a year that develop sudden onset hind limb paralysis after such injuries are brought to the Small Animal Hospital of Texas A&M University, where they receive surgical and medical treatment similar to that for human spinal cord injury. Now, researchers will test whether the new treatment works on some of these dogs, with their owners' consent.

"It would be phenomenal if it works," said Linda J. Noble-Haeusslein, PhD, a professor in the UCSF departments of Neurological Surgery and Physical Therapy and Rehabilitation Science who designed the intervention. "We are in a unique position of being able to treat a dog population where there are simply no current therapies that could effectively improve their hind limb function."

A few years ago, Noble and her UCSF colleague Zena Werb, PhD, showed how blocking the action of one protein found in the spinal cord of mammals can help mice recover from spinal cord injuries. This protein, called matrix metalloproteinase-9, can degrade pathways within the cord and cause local inflammation, leading to cell death.

The injured dogs offer a great opportunity to take the next step on this treatment because their injuries more closely mimic spontaneous human spinal cord injury and, as is the case with humans, no existing treatment has substantially reduced paralysis.

Noble's co-investigator on the new study, Jonathan Levine, DVM, an assistant professor in neurology at Texas A&M University, will treat the dogs through injections of a protein-blocking drug. He will then help the dogs through rehabilitation and assess their recovery. Ongoing studies at UCSF focus on further refining delivery of the drug so as to optimize recovery.

Other researchers have shown that movement can be preserved if as little as 18 percent to 20 percent of the nerve fiber tracts in the spinal cord remain intact.

If successful, the trials in injured dogs may lead to the development of similar treatments for people who suffer spinal cord injuries, Noble said. These are among the most expensive injuries: every person with an injured spinal cord costs the health care system millions of dollars over his or her lifetime.

Such costs often are overshadowed by the tragic and devastating personal price of the injuries, which dramatically alter lives and most often occur in younger people, with long lives in front of them. According to the National Spinal Cord Injury Statistical Center, based at the University of Alabama, Birmingham, most of the 12,000 Americans who suffer spinal cord injuries are between the ages of 16 and 30.

As of this year, some 265,000 people in the United States are living with such injuries, according to the national center. This includes many wounded soldiers who have returned home from war zones. 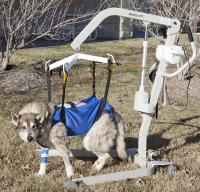