UCSF scientists have discovered the unexpected way in which a key cell of the immune system prepares for battle. The finding, they said, offers insight into the processes that take place within these cells and could lead to strategies for treating conditions from spinal cord injury to cancer.

The research focused on the neutrophil, the most common type of white blood cell. Like other cells in the immune system, its job is to seek out and destroy bacteria, viruses or other foreign entities that enter the bloodstream or organs. Scientists have known that, to do this, each cell changes its otherwise amorphous shape to form a single front, or leading edge, that approaches the invader and leads the cell into attack.

The leading edge is thought to send out some type of signal to the rest of the cell to prevent the formation of secondary fronts. Until now, scientists thought the signal was transmitted by the movement of molecules from one part of the cell to another.

Now, however, a team of researchers at the University of California, San Francisco, has shown that the neutrophil triggers this long-range inhibition by transmitting mechanical force.

The process relies on the assembly of a protein known as actin, which accumulates in the part of the cell that pushes out in the direction of its bacterial target.

In their paper, published today in the journal Cell (January 20, 2011), the team showed that the cell's protrusion stretches its membrane, taking it from lax to tight, like the rope in a game of tug-of-war. The tension is transmitted along the cell membrane, moving from front to back. It is this tension that restricts activity to the leading edge.

"This critical ability of cells to restrict activity to specific regions of their surface is essential for many processes, ranging from the regulation of cell division to the formation of multicellular organisms and the wiring of the nervous system," said lead author Orion Weiner, PhD, an assistant professor in residence at UCSF's Cardiovascular Research Institute.

The finding may help researchers identify new therapies that can promote or block the process of cell mobilization as a way of intervening in conditions, he said. After a spinal cord injury, for example, neurons don't readily cross the site of the injury, impairing motor function or leading to paralysis. There may be drugs that can help the neurons form a leading edge and enable them to jump the gap, Weiner said. Other drugs might impede cells from migrating inappropriately as they do in cancer.

To reach their conclusion, Weiner and his colleagues conducted a series of experiments in which they applied or removed tension from neutrophils and tracked the accumulation of actin and the movement of the cell. Andrew Houk, a graduate student in Weiner's lab, conducted many of the experiments. They showed that tension is necessary and sufficient to constrain the spread of an existing front and keep a cell from forming a second one.

"Our study establishes tension as a central regulator of this process of leading-edge formation," Weiner said. "The challenge now is to figure out which molecules respond to that tension and how." 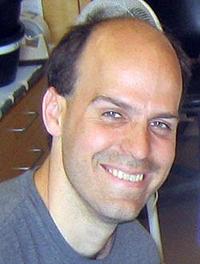