Predictions of the loss of animal and plant diversity around the world are common under models of future climate change. But a new study shows that because these climate models don't account for species competition and movement, they could grossly underestimate future extinctions.

"We have really sophisticated meteorological models for predicting climate change," says ecologist Mark Urban, the study's lead author. "But in real life, animals move around, they compete, they parasitize each other and they eat each other. The majority of our predictions don't include these important interactions."

Plenty of experimental studies have shown that species are already moving in response to climate change, says Urban, assistant professor of ecology and evolutionary biology at the University of Connecticut. For example, as temperatures rise over time, animals and plants that can't take the heat are moving to higher altitudes where temperatures are cooler.

But not all species can disperse fast enough to get to these more suitable places before they die off, Urban says. And if they do make it to these better habitats, they may be outcompeted by the species that are already there - or the ones that got there first.

With coauthors Josh Tewksbury and Kimberly Sheldon of the University of Washington, Urban created a mathematical model that takes into account the varying rates of migration and the different intensities of competition seen in ecological communities. The goal was to predict just how successful species within these communities would be at shifting to completely new habitats.

Their results showed that animals and plants that can adjust to climate change will have a competitive advantage over those that don't.

Animals with small geographic ranges, specific habitat needs and difficulty dispersing are likely to go extinct under climate change, their model shows. Further, these animals are more likely to be overrun by other species that can tolerate a wider range of habitats.

"When a species has a small range, it's more likely to be outcompeted by others," Urban says. "It's not about how fast you can move, but how fast you move relative to your competitors."

Urban likens this scenario to a train traveling up a mountain on a track. If each boxcar - representing a species - travels at the same speed, they will likely all reach the top eventually. But in reality, each car can move at a different speed, creating a collision course.

"There's always a car in front of you and a car behind," explains Urban. "When you introduce the ability to move at different speeds, they're constantly bumping into one another, even running each other over. It's a recipe for disaster."

Importantly, the authors speculate that current predictions of biodiversity loss under climate change - many of which are used by conservations organizations and governments - could be vastly underestimating species extinctions.

Tropical communities, for example, which often have many species living in small areas, could be among the hardest hit by climate change. Urban says that this is a first step toward making climate change predictions of biodiversity more sophisticated.

"This a first step - to include in our models things that we know are true, like competition and dispersal," says Urban. "Knowing these things, can we predict which species might be most at risk?"

Urban's paper appears in the January 4 online edition of the Proceedings of the Royal Society B: Biological Sciences. The work was funded by the National Science Foundation. 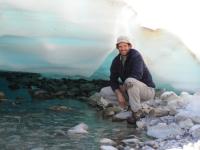