Researchers at the Niels Bohr Institute have combined two worlds - quantum physics and nano physics, and this has led to the discovery of a new method for laser cooling semiconductor membranes. Semiconductors are vital components in solar cells, LEDs and many other electronics, and the efficient cooling of components is important for future quantum computers and ultrasensitive sensors. The new cooling method works quite paradoxically by heating the material! Using lasers, researchers cooled membrane fluctuations to minus 269 degrees C. The results are published in the scientific journal, Nature Physics.

"In experiments, we have succeeded in achieving a new and efficient cooling of a solid material by using lasers. We have produced a semiconductor membrane with a thickness of 160 nanometers and an unprecedented surface area of 1 by 1 millimeter. In the experiments, we let the membrane interact with the laser light in such a way that its mechanical movements affected the light that hit it. We carefully examined the physics and discovered that a certain oscillation mode of the membrane cooled from room temperature down to minus 269 degrees C, which was a result of the complex and fascinating interplay between the movement of the membrane, the properties of the semiconductor and the optical resonances," explains Koji Usami, associate professor at Quantop at the Niels Bohr Institute.

From gas to solid

Laser cooling of atoms has been practiced for several years in experiments in the quantum optical laboratories of the Quantop research group at the Niels Bohr Institute. Here researchers have cooled gas clouds of cesium atoms down to near absolute zero, minus 273 degrees C, using focused lasers and have created entanglement between two atomic systems. The atomic spin becomes entangled and the two gas clouds have a kind of link, which is due to quantum mechanics. Using quantum optical techniques, they have measured the quantum fluctuations of the atomic spin.

"For some time we have wanted to examine how far you can extend the limits of quantum mechanics - does it also apply to macroscopic materials? It would mean entirely new possibilities for what is called optomechanics, which is the interaction between optical radiation, i.e. light, and a mechanical motion," explains Professor Eugene Polzik, head of the Center of Excellence Quantop at the Niels Bohr Institute at the University of Copenhagen.

But they had to find the right material to work with.

In 2009, Peter Lodahl (who is today a professor and head of the Quantum Photonic research group at the Niels Bohr Institute) gave a lecture at the Niels Bohr Institute, where he showed a special photonic crystal membrane that was made of the semiconducting material gallium arsenide (GaAs). Eugene Polzik immediately thought that this nanomembrane had many advantageous electronic and optical properties and he suggested to Peter Lodahl's group that they use this kind of membrane for experiments with optomechanics. But this required quite specific dimensions and after a year of trying they managed to make a suitable one.

"We managed to produce a nanomembrane that is only 160 nanometers thick and with an area of more than 1 square millimetre. The size is enormous, which no one thought it was possible to produce," explains Assistant Professor Søren Stobbe, who also works at the Niels Bohr Institute.

Now a foundation had been created for being able to reconcile quantum mechanics with macroscopic materials to explore the optomechanical effects.

"Changing the distance between the membrane and the mirror leads to a complex and fascinating interplay between the movement of the membrane, the properties of the semiconductor and the optical resonances and you can control the system so as to cool the temperature of the membrane fluctuations. This is a new optomechanical mechanism, which is central to the new discovery. The paradox is that even though the membrane as a whole is getting a little bit warmer, the membrane is cooled at a certain oscillation and the cooling can be controlled with laser light. So it is cooling by warming! We managed to cool the membrane fluctuations to minus 269 degrees C", Koji Usami explains.

"The potential of optomechanics could, for example, pave the way for cooling components in quantum computers. Efficient cooling of mechanical fluctuations of semiconducting nanomembranes by means of light could also lead to the development of new sensors for electric current and mechanical forces. Such cooling in some cases could replace expensive cryogenic cooling, which is used today and could result in extremely sensitive sensors that are only limited by quantum fluctuations," says Professor Eugene Polzik. 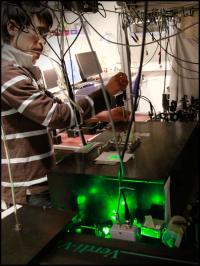 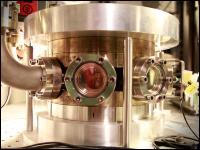 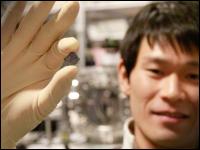