A team of researchers led by the University of Colorado Boulder has used NASA's Hubble Space Telescope to uncover a cluster of galaxies in the initial stages of construction -- the most distant such grouping ever observed in the early universe.

In a random sky survey made in near-infrared light, Hubble spied five small galaxies clustered together 13.1 billion light-years away. They are among the brightest galaxies at that epoch and very young, living just 600 million years after the universe's birth in the Big Bang. One light-year is about 6 trillion miles.

Galaxy clusters are the largest structures in the universe, comprising hundreds to thousands of galaxies bound together by gravity. The developing cluster, or protocluster, presumably will grow into one of today's massive galactic "cities" comparable to the nearby Virgo cluster, a collection of more than 2,000 galaxies.

"These galaxies formed during the earliest stages of galaxy assembly, when galaxies had just started to cluster together," says the study's leader, Michele Trenti, a research associate at CU-Boulder's Center for Astrophysics and Space Astronomy and a newly appointed scientist at the Institute of Astronomy at the University of Cambridge in the United Kingdom. "The result confirms our theoretical understanding of the buildup of galaxy clusters. And Hubble is just powerful enough to find the first examples of them at this distance."

Trenti will present his results Jan. 10 at the American Astronomical Society meeting in Austin, Texas. The study will appear in the Feb. 10 issue of the Astrophysical Journal.

Most galaxies in the universe live in groups and clusters, and astronomers have probed many mature "galactic cities" in detail as far as 11 billion light-years away. But finding clusters in the early phases of construction has been challenging because they are rare, dim and widely scattered across the sky.

"Records are always exciting, and this is the earliest and the most distant developing galaxy cluster that has ever been seen," said CU-Boulder Professor Michael Shull of the astrophysical and planetary sciences department, a member of the observing team. "We have seen individual galaxies this old and far away, but we have not seen groups of them in the construction process before."

Last year, a group of astronomers uncovered one distant developing cluster. Led by Peter L. Capak of NASA's Spitzer Science Center at the California Institute of Technology in Pasadena, the astronomers discovered a galactic grouping 12.6 billion light-years away with a variety of telescopes, including Hubble. Spectroscopic observations were made with the W.M. Keck Observatory in Hawaii to confirm the cluster's distance by measuring how much its light has been stretched by the expansion of space.

Trenti's team used the sharp-eyed Wide Field Camera 3 to hunt for the elusive catch. "We need to look in many different areas because the odds of finding something this rare are very small," Trenti said. "It's like playing a game of Battleship: The search is hit and miss. Typically a region has nothing, but if we hit the right spot we can find multiple galaxies."

Because these distant, fledgling clusters are so dim, the team hunted for the systems' brightest galaxies. These bright lights act as billboards, advertising cluster construction zones, according to the team. Galaxies at early epochs don't live alone. From simulations, the astronomers expect galaxies to be clustered together.

Because brightness correlates with mass, the most luminous galaxies pinpoint the location of developing clusters. These powerful light beacons live in deep wells of dark matter, which form the underlying structure in which galaxy clusters form, Trenti said. The team expects many fainter galaxies that were not seen in these observations to inhabit the same neighborhood.

The five bright galaxies spotted by Hubble are about one-half to one-tenth the size of our Milky Way, yet are comparable in brightness. The galaxies are bright and massive because they are being fed lots of gas through mergers with other galaxies, Trenti said. The team's simulations show that the galaxies will eventually merge and form the brightest central galaxy in the cluster, a giant elliptical similar to the Virgo Cluster's M87.

The observations demonstrate the progressive buildup of galaxies and provide further support for the hierarchical model of galaxy assembly, in which small objects accrete mass, or merge, to form bigger objects over a smooth and steady but dramatic process of collision and agglomeration. Astronomers have likened the process to streams merging into tributaries, then into rivers and to a bay.

Hubble looked in near-infrared light because ultraviolet and visible light from distant objects have been stretched into near-infrared wavelengths by the expansion of space in these extremely distant galaxies. The observations are part of the Brightest of Reionizing Galaxies or BoRG survey, which is using Hubble's Wide Field Camera 3 to search for the brightest galaxies around 13 billion years ago, when light from the first stars burned off a fog of cold hydrogen in a process called reionization.

The team estimated the distance to the newly spied galaxies based on their colors, but the astronomers plan to follow up with spectroscopic observations to confirm their distance.

Without spectroscopic observations, it's not clear whether the observed galaxies are gravitationally bound yet. The average distance between them is likely comparable to that of the galaxies in the Local Group, consisting of two large spiral galaxies, the Milky Way and Andromeda, and a few dozen small dwarf galaxies.

These observations are pushing Hubble to the limit of its ability. This region, however, will be prime country for future telescopes such as NASA's James Webb Space Telescope, an infrared observatory scheduled to launch later this decade. Webb will see farther into the infrared, allowing it to hunt for even earlier stages of galaxy assembly within 300 million years of the Big Bang.

Shull, also a faculty member at CU-Boulder's Center for Astrophysics and Space Astronomy, said the research team will receive an additional 260 orbits of observation time on Hubble to continue the search for more of the fledgling galaxy clusters as part of the BoRG survey. "There is high interest right now in learning if Earth is unique in the universe in its ability to host life," he said. "Similarly, we are interested to see if these ancient, forming galaxy clusters we have identified are unique, or if there are others out there. I expect that we may find a few more."

The Hubble Space Telescope is a project of international cooperation between NASA and the European Space Agency. NASA's Goddard Space Flight Center manages the telescope. The Space Telescope Science Institute, or STScI, conducts Hubble science operations. STScI is operated for NASA by the Association of Universities for Research in Astronomy Inc., in Washington, D.C. 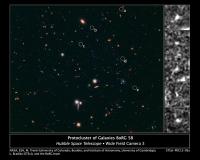