The mating habits of marine turtle may help to protect them against the effects of climate change, according to new research led by the University of Exeter. Published today (25 January 2012) in the journal Proceedings of the Royal Society B, the study shows how the mating patterns of a population of endangered green turtles may be helping them deal with the fact that global warming is leading to a disproportionate number of females being born.

The gender of baby turtles is determined by the temperature of the eggs during incubation, with warmer temperatures leading to more females being born. Higher average global temperatures mean that offspring from some populations are predominantly female. This is threatening the future of some populations and there are concerns that inbreeding within groups due to a lack of males will lead to health problems.

The study focused on a population of the green turtle, Chelonia mydas, nesting in Northern Cyprus, where, due to the high summer temperatures, 95 per cent of babies are female. The study involved a team from the University of Exeter (UK), University of Lefke (Turkey) and North Cyprus Society for Protection of Turtles. Through DNA testing, they were able to ascertain the paternity of baby turtles and, contrary to what they had expected, they found a large number of mating males.

The researchers found that 28 males sired offspring with 20 nesting females: an average of 1.4 males for every female. This means that each female's offspring were sired by one or more fathers. The researchers were surprised to find no evidence that any males fathered offspring born in that season with more than one female.

The research team had thought that one single male might be breeding with multiple females. However, their results suggest that a large number of males are mating with different females at different times. This means that there is less chance of inbreeding.

The team also carried out satellite tracking to discover that males cover thousands of miles of ocean within one breeding season. This suggests they could have also been mating with females at other sites in Turkey or North Africa.

Lead researcher University of Exeter PhD student Lucy Wright said: "It is fantastic to know that there are so many males fathering offspring in this population of green turtles. There is great concern that a lack of males could lead to inbreeding in small populations of marine turtles, potentially causing a population crash. However our research suggests that there are more males out there than expected considering the female-biased hatchling sex ratios and that their mating patterns will buffer the population against any potential feminising effects of climate change."

Corresponding author Dr Annette Broderick added: "Climate change remains a great threat to marine turtles, but our ongoing research will help us focus on where the priority areas are for management that may help them cope with future change."

The work was funded by a NERC studentship with additional support from NERC Biomolecular Analysis Facility, Sheffield. 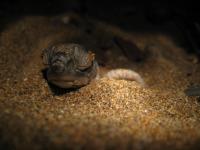 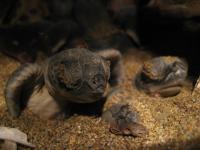