An international team of scientists led by University of Hawai'i at Mānoa Professor Ralf I. Kaiser, Alexander M. Mebel of Florida International University, and Alexander Tielens of Leiden Observatory in the Netherlands, discovered a novel chemical route to form polycyclic aromatic hydrocarbons (PAHs) - complex organic molecules such as naphthalene carrying fused benzene rings - in ultra-cold regions of interstellar space. The team announced their findings in the January 3 issue of Proceedings of the National Academy of Sciences. Funding for the study was provided by the U.S. Department of Energy, Basic Energy Sciences.

These findings have crucial implications not only to reduce the emission of PAHs as toxic byproducts from internal combustion engines, but also rationalize the synthetic routes to a key class of organic molecules in the interstellar medium associated with the origins of life.

On Earth, PAHs are associated with incomplete com­bus­tion processes and can be formed readily at elevated temperatures in combustion engines of cars and in cigarette smoke. Once liberated into the am­bient environ­ment, PAHs can be transferred into the lungs by inhalation and are strongly implicated in the degradation of hu­man health, particularly due to their high carcino­ge­nic risk po­­ten­­tial. PAHs are also se­rious water pollutants of marine ecosystems and bioaccumulate in the fatty tissue of living organisms. Together with leafy vegetables, where PAHs deposit easily, they have been further linked to soil contamination, food poisoning, liver lesions, and tumor growth.

Whereas on Earth, PAHs are classified as highly toxic, PAHs have been dubbed as the 'cradle of life' in the interstellar medium and are considered as key players in the astrobiological evolution. On the molecular level, functionalized PAHs carrying carbonyl and hydroxyl groups were found in organic extracts from the Murchison meteorite and form membrane-like boundary structures, the first in­dica­tions of a cell type structure, which are requisite to the origin of life. The compounds that are water soluble form non-soluble vesicles, constituting molecules that possess both polar and non-polar components. The hollow droplets formed by this lipid multilayer are essential for the origin of life process since they provide an environment in which the functionalized PAHs can evolve by isolating and protecting them from the surrounding medium.

Scientists have been researching the formation of PAHs in combustion flames and in the interstellar medium for decades, but the formation mechanism of even the simplest PAH prototype - the naphthalene molecule (C10H8) as present in earthly mothballs - has remained an open question. Textbook knowledge postulates that classical reaction mechanisms involve complex reactions following hydrogen abstraction and acetylene addition (HACA) sequences with substantial 'activation energies.' These processes can only operate at high temperatures of a few 1,000 K as present, for instance, in combustion processes and in the outflows of carbon-rich stars and planetary nebulae. However, in recent years it has become quite clear that interstellar PAHs are rapidly destroyed in the interstellar medium upon photolysis, interstellar shock waves driven by supernova explosions, and energetic cosmic rays. The destruction time scales are much shorter than the timescale for injection of new material into the interstellar medium by carbon-rich Asymptotic Giant Branch (AGB) stars and carbon-rich planetary nebulae as the descendants of AGB stars. Therefore, the ubiquitous presence of PAHs in the interstellar medium implies a cru­cial, previously unexplained route to a fast chemical growth of PAHs in the cold environment of the interstellar medium at temperatures down to 10 K, where the classical HACA reaction mechanism cannot function, since entrance barriers (classical 'activation energies') cannot be overcome.

To unravel the formation of naphthalene as the simplest representative of PAHs, University of Hawai'i at Mānoa chemists Dorian S.N. Parker, Fangtong Zhang, Seol Kim, and Ralf I. Kaiser conducted gas phase crossed molecular beam experiments in their laboratory and presented that naphthalene can be formed as a consequence of a single collision event via a barrier-less and exoergic reaction between the phenyl radical and vinylacetylene involving a van-der-Waals complex and submerged barrier in the entrance channel. Angular resolved mass spectrometer measurements of the reaction products together with isotopic labeling confirmed that naphthalene plus a single hydrogen atom, were produced. To support the derived mechanism involved in the formation of naphthalene, theoretical chemists at Florida International University (Alex Landera, Vadim V. Kislov, Alexander Mebel), merged the experimental results with theoretical computations. Theoretical computations also provide the three-dimensional distribution of electrons in atoms and thus the overall energy level of a molecule. Mebel's computations showed that naphthalene is formed from the reaction of a single phenyl radical colliding with vinylacetylene. Most importantly, since the temperatures of cold molecular clouds are very low (10 K), the computations indicate that the reaction has no entrance barrier ('activation energy').

"These findings chal­len­ge conventional wisdom that PAH-formation only occurs at high tem­pe­ra­tures such as in combustion systems and implies that low tem­pe­ra­tu­re chemistry can initiate the synthesis of the very first PAH in the interstellar medium," said co-author Tielens.

In the future, the team plans to expand these studies to unravel the formation routes to more complex PAHs like phenan­thre­ne and anthracene, and also to nitrogen-substituted PAHs such as indole and quinoline. This concept can be also expanded to functionalized PAHs with organic side chains thus bringing researchers closer to solving the decade old puzzle of how complex PAHs and their derivatives can be synthesized in combustion flames and in cold interstellar space. 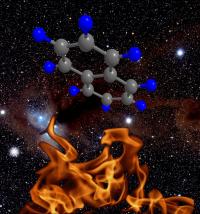