Hydrogen molecules may act as a kind of energy sink that strengthens the magnetic grip that causes sunspots, according to scientists from Hawaii and New Mexico using a new infrared instrument on an old telescope.

"We think that molecular hydrogen plays an important role in the formation and evolution of sunspots," said Dr. Sarah Jaeggli, a recent University of Hawaii at Manoa graduate whose doctoral research formed a key element of the new findings. She conducted the research with Drs. Haosheng Lin, also from the University of Hawaii at Manoa, and Han Uitenbroek of the National Solar Observatory (NSO) in Sunspot, New Mexico. Jaeggli now is a postdoctoral researcher in the solar group at Montana State University. The team's results will be published in the February 1 issue of the Astrophysical Journal.

They used the new Facility Infrared Spectropolarimeter (FIRS) at the Dunn Solar Telescope at Sunspot, New Mexico, and the older Horizontal Spectrograph. Although built in 1969, the Dunn is now equipped with advanced adaptive optics that correct for much of atmospheric blurring.

The team analyzed seven active regions on the Sun, one in 2001 and six during December 2010 to December 2011 as Sunspot Cycle 23 faded away. The full sunspot sample has 56 observations of 23 different active regions.

Sunspots appear to come and go in approximate 11-year cycles. They are brighter than an arc-welder's torch, but appear black because the surrounding solar surface is so much brighter. Galileo and his contemporaries discovered sunspots in 1610. George Ellery Hale discovered magnetism in spots in 1908, and scientists soon determined that intense magnetism suppresses the normal convective motions present throughout the solar photosphere and forms "cool" spots."

But the details remain a mystery. Among the clues solar physicists have observed is a direct relationship between the spot's inner temperature and its magnetic field strength. But at very low temperatures, the field strength makes a sharp rise.

"This result is puzzling," noted Jaeggli and her colleagues. "It implies some undiscovered mechanism inside the spot."

One suspect is hydrogen atoms combining into hydrogen molecules (H2). The Sun is about 90 percent hydrogen atoms* (plus 10 percent helium and 0.13 percent everything else). Most of the hydrogen is ionized atoms since the average surface temperature is an inferno-like 5780K (9944 deg. F). Yet it is a "cool star" since astronomers can detect heavy-element molecules in the solar spectrum. In 1997 they even found water, as traces of super-heated steam, inside spots.

This suggests that a spot's cool umbra, the "black" shadow at center, might let hydrogen molecules combine in surface layers. As early as 1986, the late Professor Per E. Maltby and colleagues at the University of Oslo predicted that the gas in the umbra could be as much as 5 percent hydrogen molecules.

Such a shift would cause a major change in sunspot dynamics. A basic law of physics is that gas particles exert the same pressure whether they are atoms or molecules. A hydrogen molecule will provide half the pressure of the two atoms it used to be. And bonds between atoms oscillate and rotate, thus storing energy without raising the temperature. This is why water absorbs a lot of heat before boiling.

"The formation of a large fraction of molecules may have important effects on the thermodynamic properties of the solar atmosphere and the physics of sunspots," said Jaeggli.

But direct measurement of hydrogen molecules in spots is beyond our grasp for now, so the team measured a stand-in, the hydroxyl radical made of one atom each of hydrogen and oxygen (OH). About 1 percent of the mass of the Sun is oxygen. OH dissociates, or breaks into atoms, at a slightly lower temperature than H2, meaning H2 can also form in regions where OH is present. By coincidence, one of its infrared spectral lines is 1565.2nm, almost the same as the 1565nm line of iron, used for measuring magnetism** in a spot and one of the lines FIRS is designed to observe. These are twice the wavelength of the deepest red, 770nm, the human eye can see.

First using the older HSG in 2001, and then with the more advanced FIRS in 2009󈝶, the team measured magnetic fields across sunspots, and the OH intensity inside spots. From that, they calculated the H2 concentrations.

"We found evidence that significant quantities of hydrogen molecules form in sunspots that are able to maintain magnetic fields stronger than 2,500 Gauss," said Jaeggli. By comparison, Earth's magnetic field, which turns a compass needle, is about one-half Gauss. The team estimated a hydrogen molecule quantity of a few percent.

Jaeggli added that its presence leads to a temporary "runaway" intensification of the magnetic field. Magnetic flux emerges from the interior and suppresses convection at the surface, trapping cool gas that has radiated its energy into space. Molecular hydrogen then forms, reducing the volume. This is more transparent than atomic hydrogen, so more energy radiates into space, cooling the gas further. Hot gases around the emerging flux compress the cooler region and intensify the magnetic field.

Eventually it levels out, partly from energy radiating in from the surrounding gas. Otherwise, the spot would grow without bounds. As the magnetic field weakens, the H2 and OH molecules heat up and dissociate back to atoms, compressing the remaining cool regions and keeping the spot from collapsing.

The team says that simulations are needed to test their observations. They also note that most of the active regions observed are of modest field strength. They expect that Cycle 24, which is now ramping up, will provide stronger active regions for a test of their hypothesis.

NSO's mission is to advance knowledge of the Sun, both as an astronomical object and as the dominant external influence on Earth, by providing forefront observational opportunities to the research community. NSO is operated by Association of Universities for Research in Astronomy (AURA Inc.) under a cooperative agreement with the National Science Foundation (NSF) for the benefit of the astronomical community.

Founded in 1967, the Institute for Astronomy at the University of Hawaii at Manoa conducts research into galaxies, cosmology, stars, planets, and the sun. Its faculty and staff are also involved in astronomy education, deep space missions, and in the development and management of the observatories on Haleakala and Mauna Kea.

Jaeggli, S. A. 2011. An Observational Study of the Formation and Evolution of Sunspots. Dissertation presentation, June 13, 2011. http://solar.physics.montana.edu/jaeggli/pubs.html

* This is the atomic count. By mass, the Sun is about 75 percent hydrogen, 24 percent helium, and 1.5 percent everything else.

** Magnetic fields are measured by the splitting of certain spectral lines. 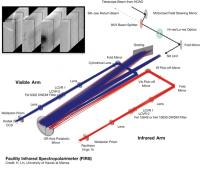