For more than a quarter of a century, Jerald "Snook" Pataky's research in the University of Illinois Sweet Corn Hybrid Disease Nursery has been helping growers make important decisions to increase their profitability.

His observations and trends from evaluating sweet corn hybrids for disease resistance are featured this month in Plant Disease.

"Few crop scientists have anywhere near a quarter century of data - from their own lab - that tells such a comprehensive story," said Marty Williams, a weed ecologist with the USDA-ARS at the U of I. "Although the nursery represented only a portion of his research program, it shed light on major changes in the sweet corn industry from 1984 to 2010. I suspect this paper, or rather his program, will be seen as a landmark to the industry."

Since 1984, nearly 3,700 commercial or pre-commercial sweet corn hybrids have been evaluated for disease reactions in nurseries at the University of Illinois.

"Prior to the initiation of the U of I Sweet Corn Hybrid Nursery, well documented information about disease reactions of sweet corn hybrids was not readily available," Pataky said. "But now, the reactions of nearly all commercial hybrids to the most prevalent diseases are known throughout the industry and easily accessible at www.sweetcorn.illinois.edu."

This nursery has achieved worldwide recognition and has served as an impetus for commercial sweet corn breeders to improve the resistance of the new hybrids being developed, he added.

"The disease nursery helps identify hybrid reactions to diseases such as rust, maize dwarf mosaic, northern corn leaf blight and others," Pataky said. "We want to help the industry know which lines are not subject to injury as a result of host resistance, and those that are likely to sustain economic losses if any of the diseases are prevalent."

U of I researchers have played an important role in developing disease resistance in sweet corn, he said. In 1985, there were approximately five sweet corn hybrids with rust resistance. Today, more than half of the 600 commercial and pre-commercial hybrids available are rust resistant and use genes identified by A.L. Hooker at U of I.

On a similar note, in the 1980s, only a handful of hybrids were resistant to maize dwarf mosaic virus (MDM). Today, nearly 100 commercial or pre-commercial MDM-resistant hybrids exist. The primary sources of resistance were the M-series of inbred lines developed by Dusty Rhodes and Mark Mikel at U of I.

"It's a matter of incorporating the right combination of resistances to multiple diseases in the hybrids that are suited for various market niches in different locations throughout the country," Pataky said. "And with genetically diverse and changing pathogens, it's a unique challenge."

In the Plant Disease article, Pataky shared 10 trends in sweet corn, including shifts in endosperm types and reactions to post-emergence herbicides.

"Shrunkens (supersweets) were just beginning to emerge in shipper markets, or grocery stores, when I started at Illinois," he said. "Today, shipper hybrids are nearly 100 percent supersweet."

Pataky said part of the change in the prevalence of endosperm type during the past decade resulted from the introduction of "high quality" shrunken-2 hybrids that have multiple endosperm mutations. These varieties combine elevated levels of kernel sugars and extended shelf life from John Laughnan's shrunken-2 endosperm type with tender pericarp and creamy texture from A.M. "Dusty" Rhodes' sugary enhancer endosperm type.

In 2002, at the request of companies in the sweet corn seed and food processing industries, evaluations of hybrid responses to applications of post-emergence herbicides were added to the Illinois sweet corn nursery.

"The sweet corn industry was aware that certain hybrids were sensitive to various post-emergence herbicides with various modes of action, but no one connected the common method by which these herbicides were metabolized," Pataky said. "Nor had anyone realized that mutation in a single gene in corn caused cross-sensitivity to all of these herbicides."

Because of this research, plant breeders now understand the genetic basis for this sensitivity and can eliminate the problem by selecting against the mutant CYP alleles or by enhancing P450 metabolism with herbicide "safeners," he added.

"Information from the nursery has documented and publicized the added value of disease-resistant hybrids," Pataky said. "This, in turn, has allowed sweet corn breeders to focus on improving disease resistance without too much worry that those efforts would be unrewarded in terms of increased seed sales."

Pataky's article, "Observations from a Quarter Century of Evaluating Reactions of Sweet Corn Hybrids in Disease Nurseries," appeared in the December issue of Plant Disease. Researchers include Jerald "Snook" Pataky and Martin Williams II of the U of I; and four former U of I graduate research assistants, including John Headrick of Monsanto Company; Claude Nankam of World Vision International in Malawi; Lindsey du Toit of Washington State University; and Phillip Michener of Terral Seeds.

Pataky is now a professor emeritus in the U of I Department of Crop Sciences. He has taught more than 50 classes during his 28 years of serving as a faculty member.

A quarter of a century of sweet corn observations 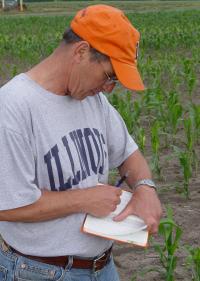