URBANA - When the water in the Mississippi River rose to 58 feet with a forecast of 60 feet or higher in May 2011, the emergency plan to naturally or intentionally breach the levees, established over 80 years prior, was put in motion. The flood of 1937 did top the frontline levee and water passed into and through the New Madrid Floodway, but being floodfree since then caused area landowners to oppose the plan being put into action.

"After a delay due to a legal appeal from area landowners, the U.S. Army Corps of Engineers was finally given permission by the U.S. Supreme Court to open the floodway, but by that time, the Mississippi River was 4 feet higher than planned for," said University of Illinois researcher Kenneth Olson. "The initial additional force and depth of floodwater caused more damage to buildings and more deep land scouring than was predicted. The strong current and sweep of water through the Birds Point, Missouri, breach created deep gullies in 133,000 acres of Missouri farmland, displaced tons of soil, and damaged irrigation equipment, farms, and homes."

Olson has followed the drama of the deliberate flooding closely and believes it will create long-lasting, if not permanent, agricultural damage to hundreds of acres of land. The rushing water gouged large deep gullies on parcels of land adjacent to the blown levees and on some distant fields. The land was also covered with a thick sand deposit and in some areas adjacent to where new crater lakes were formed.

"Reclamation efforts by the Corps of Engineers included patching the frontline and fuse plugs levees with the sand, and topsoil was trucked in," Olson said. "The former 60.5 feet fuse plug and the 62.5 feet front line levee was rebuilt, raising it initially to 51 feet and then, after input from local farmers, to 55 feet. Proper drainage in the area has been restored, but the unanticipated fields with large and deep gullies located five miles from the levee breaches will not be repaired very easily." Olson believes that even if the fields of gullies are reclaimed, the soils are likely to have lower productivity.

"The resulting land surface will have less soil aggregation, less organic carbon, and be more sloping, making it difficult to farm the land," he said. "Some of this lost cropland could be restored as wetlands and wildlife habitat adjacent to the patched levees."

The Impacts of 2011 induced levee breaches on agricultural lands of Mississippi River Valley, coauthored by Lois Wright Morton, is published in the Jan.-Feb. 2012 issue of the Journal of Soil and Water Conservation.

Olson previously reported on the extensive ponding and soil erosion that occurred after the heavy spring rains of 2008 that drowned corn and soybean crops in Illinois, Missouri, and Indiana (published in the Nov.-Dec. 2009 issue of the Journal of Soil and Water Conservation).

"Over the last 30 years, many soil and water conservation practices and structures were no longer used, and soil erosion standards were met using conservation tillage and no-till systems," Olson said. "Most remaining terraces, contour farming, strip cropping, and waterways were effective. But many waterways were filled above capacity and were eroded by fast-moving water or had significant sediment depositions."

At that time, Olson said that fewer soil conservation structures and retention ponds were being built and maintained than in the past, although in Missouri significant acreage of unprotected agricultural lands was converted to fish and wildlife use.

Olson recommended potential solutions to reduce the flooding impact on agricultural lands in flat watersheds with poorly drained soils, such as creating temporary water storage structures, changing the crop rotation in the upland to include more forages rather than row crops, converting more of the agricultural land to timberland or grassland that can use or store more water, and building higher and stronger levees that are located farther from the riverbanks to widen the river flow channel.

"It would also be logical to accept periodic levee breaks or stop using the floodplain soil for agricultural crop production. Instead the land could be converted to conservation use and restore the periodic water storage function to the natural floodplain."

Olson and his colleagues Mike Reed and Lois Wright Morton contend that strategically placed wetlands, settling basins, nutrient filtering, and levees are effective management for internal control of water and sediment. They point to Sny Island Levee Drainage District as a model for what could be accomplished with additional effort. Their findings were published in the Jul.-Aug. 2011 issue of the Journal of Soil and Water Conservation.

"The Sny Island District has developed pioneering ways to reduce local flooding and decrease the sediment and nutrient loads being discharged into the Mississippi River," Olson said.

But Olson adds that more than half of Sny Island's $2 million annual revenue is spent on fuel costs to run their three pumping stations continuously during periods of high water runoff.

"As the price of fuel oil increases, high commodity prices will be needed," he said. "One way to mitigate this treadmill is to build on the diverse habitat created by wetlands, sediment basin, and levees, and purposefully develop an economic tourism plan to increase the recreational use of this region." 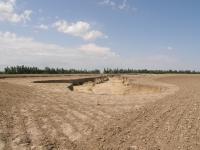