Although it's a common practice to study plant populations in field corn, U of I associate professor of crop sciences and USDA-ARS ecologist Marty Williams, said almost no research exists for determining the number of plants needed to optimize yield in processing sweet corn, which accounts for most of the U.S. sweet corn acreage.

"The only published results on this subject took place in the mid-1960s on the varieties Golden Cross Bantam and Jubilee," Williams said. "Today those hybrids are 79 and 50 years old, respectively. The sweet corn industry, both growers and processors, needs relevant information on modern varieties to help them achieve maximum profits."

The priorities of processing sweet corn are quite different than fresh-market sweet corn, he said.

"Unlike fresh-market sweet corn, ear size and appearance don't really matter in processing sweet corn," Williams said. "What's important is how many cases of sweet corn are produced per acre."

Because of this, fresh-market sweet corn research simply doesn't apply since different hybrids are used and different traits are important. In 2009, the Midwest Food Processors Association asked Williams to conduct research on the relationship between plant populations and profitability in processing sweet corn.

So where does yield peak for processing sweet corn, and what plant population does it take to get there?

The answer is not that simple. Williams evaluated six widely used hybrids from Del Monte, Syngenta Seeds and Crookham Company. The hybrids were planted under a wide range of plant populations and growing conditions.

Recovery, or the percentage of ear mass that's represented by kernel mass, was surprisingly varied and ranged between 32 to 38 percent among hybrids, he said. Higher recovery reduces processors' costs because less volume of corn is handled.

Across all environments, plant populations to maximize yield differed by more than 9,000 plants per acre among the hybrids.

The average plant population of the six hybrids - 23,500 plants per acre - would not be enough to maximize yield for some varieties, but would be too much for others, Williams said. None of the hybrids came close to optimal plant populations of field corn, which in recent reports from the upper Midwest, range from 32,000 to 35,000 plants per acre.

"The sweet corn hybrid itself has a major effect on profitability," he said. "The gross profit margin to processors varied $1,500 an acre among hybrids. If I were growing sweet corn under contract, I'd want to know the hybrid, since profit to the grower varied as much $211 per acre among the varieties we tested."

One of the challenges Williams noted was that the top-performing hybrids looked nothing alike, nor was it clear exactly why they had better stress tolerance to higher populations. More research is needed to provide sweet corn breeders with this information.

"We compared these results to plant populations observed in growers' fields throughout Illinois, Minnesota, and Wisconsin," Williams said. "We found evidence that higher profit, to growers and processors alike, is possible with greater plant populations of certain hybrids."

This study, "Agronomics and economics of plant population density on processing sweet corn," was funded by USDA-ARS and published in Field Crops Research.

Sweeten up your profits with the right hybrid 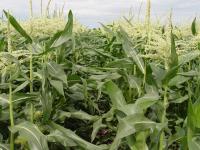