COLLEGE PARK, Md. - Maryland planners, developers and land-use advocates consider the state's smart growth tools too weak, frustrating their desire for development within existing urban areas, finds a new University of Maryland study based on interviews with a representative group of stakeholders.

"Just about everyone feels squeezed between a rock and a hard place - wanting development where state laws intend to promote growth, but often seeing it thwarted by both local opposition and regulatory barriers," says study co-author Gerrit Knaap, who directs the University of Maryland National Center for Smart Growth.

"All stakeholders express a great deal of frustration, and most urge a more coordinated system," he adds.

The report, "Barriers to Development Inside Priority Funding Areas: Perspectives of Planners, Developers, and Advocates, " is based on in-depth interviews with 47 representatives of three key stake-holder groups active in the Baltimore-Washington corridor.

SPECIFIC FINDINGS: The researchers find that a majority of stakeholders believe it is easier to develop outside areas designated for smart growth - so-called Priority Funding Areas (PFAs). Storm water regulations, citizen opposition, and adequate public facility ordinances were the reasons most frequently cited as hindering development inside PFAs.

Earlier research by Knaap and the National Center for Smart Growth found objective indications that the state's regulatory system is "barely moving the needle on most widely accepted measures of smart growth."

The new study is one of the first systematic investigations of the perceptions of stakeholders, with knowledge based on personal experience, the researchers say.

"The findings of this report confirm what we have been saying for some time: Priority Funding Areas need to be strengthened if Maryland wants to grow smart," Knaap says. "But the unanimity of opinion is striking. The majority want more effective tools and better coordination of policies."

PARTICIPANTS: The planners interviewed included representatives from the twelve counties in the study area as well as the eight largest municipalities with zoning and planning authority.

The developers interviewed were from a diverse group, including firms specializing in mixed-use urban-infill development; traditional single-family residential development, and commercial development.

While the sample size is too small to support rigorous statistical analysis, the researchers say the study is indicative of widely held perceptions.

RECOMMENDATIONS: The report lists a series of recommendations that it says are needed for state and local governments to balance economic development, population growth and improve the water quality in the Chesapeake Bay.

These include steps designed to integrate PFA targets more fully into a county's overall planning process; make sure that PFAs are drawn to accommodate non-residential development and mixed-use projects; give local governments greater flexibility in defining the PFAs, provided they adequately restrict growth in other locations; give local areas greater flexibility to reduce infrastructure and other regulatory restrictions within the PFAs; among other incentives designed to make development in PFAs more attractive to developers and local governments.

"If the system is to work more smoothly, areas designated for smart growth need to be practical and attractive for all parties, and that entails building a lot more flexibility into the system," Knaap concludes. "State and local governments need to assure there is capacity and political support to grow inside PFAs."

Located at the University of Maryland, College Park, the National Center for Smart Growth is a non-partisan center for research and leadership training on smart growth and related land use issues in Maryland, in metropolitan regions around the nation, and in Asia and Europe.

Why smart growth frustrates players in the system: UMD research 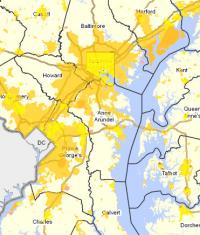