AMHERST, Mass. - A recent study by sleep researchers at the University of Massachusetts Amherst is the first to suggest that a person's emotional response after witnessing an unsettling picture or traumatic event is greatly reduced if the person stays awake afterward, and that sleep strongly "protects" the negative emotional response. Further, if the unsettling picture is viewed again or a flashback memory occurs, it will be just as upsetting as the first time for those who have slept after viewing compared to those who have not.

UMass Amherst neuroscientists Rebecca Spencer, Bengi Baran and colleagues say this response could make sense from an evolutionary point of view, because it would provide survival value to our ancestors by preserving very negative emotions and memories of life-threatening situations and a strong to incentive to avoid similar occasions in the future.

"Today, our findings have significance for people with post-traumatic stress disorder, for example, or those asked to give eye-witness testimony in court cases," Spencer says.

"We found that if you see something disturbing, let's say an accident scene, and then you have a flashback or you're asked to look at a picture of the same scene later, your emotional response is greatly reduced, that is you'll find the scene far less upsetting, if you stayed awake after the original event than if you slept. It's interesting to note that it is common to be sleep-deprived after witnessing a traumatic scene, almost as if your brain doesn't want to sleep on it." The study is reported in the current issue of the Journal of Neuroscience.

In their experiments involving 68 healthy female and 38 male (total 106) young adults between 18 and 30 years old, Spencer and colleagues set out to explore, among other ideas, an assumption that the well-known enhancement of memory that occurs during sleep is tied to a change in emotional response to the memory.

Further, in a subset of subjects the neuroscientists used a polysomnograph with electrodes attached to subjects' scalps as they slept, to investigate whether dreaming or other brain processes that occur during rapid-eye-movement (REM) sleep periods may play a role in the processing of emotions.

In the two-phase experiment, participants were shown pictures on a computer screen and asked to rate each one as sad or happy as well as their own response as calm or excited to each, on a scale of 1-9. The researchers counted sad-happy ratings and calm-excited of 1-3 as negative images and 4-6 as neutral, so each participant's overall "emotional value" score was unique.

Twelve hours later, participants were shown a mix of new and already viewed pictures and asked whether they had ever seen the picture before and to rate each again on the two scales. They all kept a sleep diary and took a sleep quality index test, as well.

Session timing was arranged so that 82 subjects were assigned either to a Sleep group who saw the first set of pictures late in the day and the second group of pictures after they had slept overnight or to a Wake group, who saw the first set of pictures in the morning and the second set later the same day. To rule out a possible circadian effect on attention, 24 different subjects followed the same routine but with only a 45-minute break between the two phases. Polysomnography data were collected from 25 participants in the Sleep group in their own homes overnight.

Spencer and colleagues found that sleep had significant effects on participants' memories and feelings. Recognition memory for the pictures was better following sleep compared with wake.

Importantly, the researchers found that contrary to previous assumptions that sleep might soften negative emotional effects of a disturbing event, a period of sleep was associated with participants' maintaining the strength of their initial negative feelings compared to a period of wakefulness. This suggests that sleep's effect on memory and emotion are independent, the authors state.

This work was supported by the National Institutes of Health and the UMass Amherst Commonwealth Honors College. 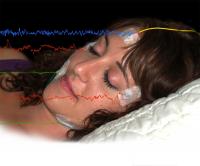 Polysomnography for Study of Sleep and Emotion (IMAGE)
view more