Wednesday, January 4, 2012 -- CHAPEL HILL - People with high cholesterol are at risk of heart attack and stroke because atherosclerotic plaques within their arteries can rupture triggering the formation of a blood clot called an occlusive thrombus that cuts off the blood supply to their heart or brain.

For years, scientists have studied the cause of this abnormal clotting. Now, a study led by researchers from the University of North Carolina at Chapel Hill School of Medicine, has identified a molecular pathway that leads to this abnormal blood clotting and turned it off using a popular class of cholesterol-lowering drugs, statins.

The research was performed using humans, monkeys and mice with highly elevated blood lipid levels. It indicated that elevated levels of oxidized low density lipoprotein (LDL) induces a molecule called "tissue factor" that triggers clotting. The study appears online in the January 3, 2012 issue of the Journal of Clinical Investigation.

"Statins have been shown to have antithrombotic activity in several previous studies. However, I believe our study is the first to elucidate how statins reduce the activation of the blood clotting process independently of their lipid lowering activity, said senior study author Nigel Mackman, PhD, FAHA. Mackman is the John C. Parker Distinguished Professor of Hematology in the Department of Medicine and Director of the UNC McAllister Heart Institute.

Additionally, Mackman noted that statins "only target the 'bad and inducible tissue factor', not the good one used in normal clotting, and therefore should not be associated with the increased bleeding risk that is a typical side effect of anticoagulant drugs currently on the market."

Mackman has spent the last twenty-five years studying tissue factor, the number one initiator of clotting in the body. Tissue factor normally resides outside the blood vessels, only coming into contact with blood after an injury, such as cutting your finger. However, it is expressed at high levels under certain abnormal conditions, such as inside atherosclerotic plaques, and gets turned on in a special subset of blood cells called monocytes. Mackman wondered if this was the cause for the abnormal clotting seen in patients with high cholesterol.

To test his hypothesis, Mackman and his colleagues analyzed humans, monkeys and mice with high cholesterol. They found that all three groups have elevated levels of tissue factor in the circulation. Then the researchers treated the mice and monkeys with simvastatin, a drug widely used to treat high blood cholesterol levels. They showed that simvastatin reduced levels of oxidized low density lipoprotein and circulating tissue factor which normalized coagulation without altering plasma cholesterol levels.

These results suggest that oxidized low density lipoproteins induce tissue factor expression on monocytes and this contributes to formation of an occlusive thrombus after plaque rupture.

The research was funded largely by the National Heart, Lung and Blood Institute, a component of the National Institutes of Health. The majority of this work was performed by A. Phillip Owens III, PhD. Other study co-authors from Dr. Mackman's lab at UNC were Silvio Antoniak, PhD; Julie C. Williams; and Jianguo Wang, PhD.

Benefits of statin therapy may extend beyond lowering lipids 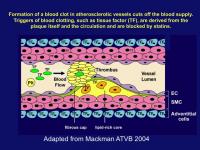