CHAPEL HILL, N.C. - For more than 40 years, scientists and physicians have thought eating a high-fiber diet lowered a person's risk of diverticulosis, a disease of the large intestine in which pouches develop in the colon wall. A new study of more than 2,000 people reveals the opposite may be true.

The study, conducted by researchers at the University of North Carolina at Chapel Hill School of Medicine , found that consuming a diet high in fiber raised, rather than lowered, the risk of developing diverticulosis. The findings also counter the commonly-held belief that constipation increases a person's risk of the disease.

"Despite the significant morbidity and mortality of symptomatic diverticulosis, it looks like we may have been wrong, for decades, about why diverticula actually form," said Anne Peery, MD, a fellow in the gastroenterology and hepatology division at UNC and the study's lead researcher. The study appears in the February 2012 issue of the journal Gastroenterology.

"While it is too early to tell patients what to do differently, these results are exciting for researchers," said Peery. "Figuring out that we don't know something gives us the opportunity to look at disease processes in new ways."

Diverticulosis affects about one-third of adults over age 60 in the United States. Although most cases are asymptomatic, when complications develop they can be severe, resulting in infections, bleeding, intestinal perforations and even death. Health care associated with such complications costs an estimated $2.5 billion per year.

Since the late 1960s, doctors have recommended a high-fiber diet to regulate bowel movements and reduce the risk of diverticulosis. This recommendation is based on the idea that a low fiber diet will cause constipation and in turn generate diverticula as a result of increased pressure in the colon. However, few studies have been conducted to back up that assumption. "Our findings dispute commonly-held beliefs because asymptomatic diverticulosis has never been rigorously studied," said Peery.

The UNC study is based on data from 2,104 patients aged 30-80 years who underwent outpatient colonoscopy at UNC Hospitals from 1998-2010. Participants were interviewed about their diet, bowel movements and level of physical activity.

The study found no association between diverticulosis and physical inactivity, intake of fat, or intake of red meat. The disease's causes remain unknown, but the researchers believe gut flora may play a role.

Peery said more research is needed before doctors change dietary recommendations, but the study offers valuable insights on diverticulosis risk factors. "At this time, we cannot predict who will develop a complication, but if we can better understand why asymptomatic diverticula form we can potentially reduce the population at risk for symptomatic disease," said Peery. 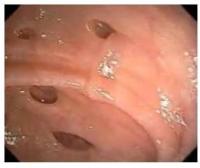