PHILADELPHIA -- Over many generations, people living in the high-altitude regions of the Andes or on the Tibetan Plateau have adapted to life in low-oxygen conditions. Living with such a distinct and powerful selective pressure has made these populations a textbook example of evolution in action, but exactly how their genes convey a survival advantage remains an open question. Now, a University of Pennsylvania team has made new inroads to answering this question with the first genome-wide study of high-altitude adaptations within the third major population to possess them: the Amhara people of the Ethiopian Highlands.

"These three groups took different genetic approaches to solving the same problem," said senior author Sarah Tishkoff, a Penn Integrates Knowledge professor with appointments in the genetics department in Penn's Perelman School of Medicine and the biology department in the School of Arts and Sciences.

The Penn team collaborated with Dawit Wolde Meskel, Dawit Abate and Gurja Belay of the Department of Biology of Addis Ababa University.

Their research was published today in the journal Genome Biology.

One of the guiding principles behind evolution is natural selection; the more an organism is suited to its environment, the more likely it is to survive and pass on its genes. In high-altitude environments, oxygen concentration is low, a condition that can rapidly sicken -- even kill -- individuals who are not acclimated.

"As genetic anthropologists," Scheinfeldt said, "we know what patterns of genetic variation we expect to see after positive, or Darwinian, selection has occurred. Then we look for those patterns in the genome and try to make biological sense of what we find.

"The easiest way for us to do this is to look at situations where there's been very strong selective pressure: a disease with a really high mortality rate, or here at high-altitude where there are hypoxic conditions. This kind of situation makes a dramatic difference in terms of who passes on their genes, so it gives us more power to find the genetic signatures left behind."

Pregnant women are especially susceptible to the physiological pressure represented by hypoxia, which influences the birth weight and health of their children. Yet people have been living in the high-altitude regions of the Andes and the Tibetan Plateau for generations, with little apparent ill effect.

Anthropologists, notably, Cynthia Beall, of Case Western University, and Lorna Moore, of Wake Forest University, have therefore extensively documented their physiological traits, trying to understand how these groups offset the problems pregnant women would normally have in hypoxic environments. More recently, geneticists have attempted to correlate these physical traits, or phenotypes, with the genes that are responsible for them, or genotypes.

Researchers have long wanted to add additional populations for comparison, and while the people of the Ethiopian Highlands met the criteria, living at over 3,000 meters above sea level, economic, linguistic and geographic hurdles stood in the way of collecting the data.

"This was an extremely challenging study. The logistics alone, getting permits and permission to do this trip, took us many years," Tishkoff said.

"Sampling from these remote populations was also very difficult," said Simon Thompson, who was part of the group's field team. "Roads were impassable and we spent a lot of time just trying to find the groups that were living at the highest altitude possible."

"We make these comparisons," Scheinfeldt said, "to figure out where in the genome the high-altitude group looks distinct from the other groups. Those distinct areas are candidate regions for genetic variants contributing to high altitude adaptation. Two of the top candidates are involved in the HIF-1 pathway, a pathway that is initiated in hypoxic conditions."

Both the Andean and Tibetan populations had mutations related to the HIF-1 pathway as well, but all three groups differed in both genotype and phenotype. One difference in phenotype had to do with hemoglobin, the part of the blood that transports oxygen. Ethiopians and Andeans had hemoglobin levels that were higher than low-altitude populations, but the Tibetans had average levels.

The researchers also discovered a variant in the Ethiopian groups in a gene involved in mitochondrial function. Mitochondria regulate the production of ATP, the chemical cells use for energy, making this gene another interesting candidate for playing a role in adaptation to high altitude.

These differences all seem to play a role in how well a body can maintain homeostasis in low-oxygen conditions, but even seemingly clear advantages, such as higher levels of hemoglobin, are only proxies for more complex phenotypic changes. Putting them together into the big picture of how certain genes translate into a survival advantage will require more focused research based on the Tishkoff lab's findings.

We're chipping away at this question," Scheinfeldt said. "Every little bit helps."

Such research holds promise beyond understanding the history of these populations.

"There's a lot of interest in this kind of research from the biomedical community, in terms of lung physiology and oxygen transport," Tishkoff said. "If one can understand how it is that people who have these genetic adaptations can do fine at these high altitudes while the rest of us suffer, it could help us better understand one of the body's vital systems."

This research was supported by funding from the National Institutes of Health and the National Science Foundation. 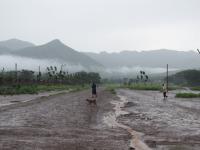