William Shakespeare's mastery of the English language is displayed more in the grammar he used than in his words, according to a researcher at the University of Strathclyde in Glasgow, Scotland.

Dr Jonathan Hope, a Reader in English in the Faculty of Humanities & Social Sciences, has found that, while Shakespeare may appear to have used and coined more words than his contemporaries, this could be attributed to the fact that more of his writing survives and his rate of word coinage is actually similar to other writers.

By contrast, he believes that, while Shakespeare's grammar and word ordering have largely fallen into disuse, they are what set him apart and have helped to ensure his continued prominence.

In a chapter in a new book on the English language, Dr Hope assesses linguistic, grammatical and syntactical features in passages from Shakespeare. He finds that, while these may make some of the writing more difficult for modern audiences to understand, they are among the playwright's most distinctive features.

Dr Hope said: "Although Shakespeare has had an enormous influence on literature, it's difficult to think of anyone else who has ever written like him.

"He was writing at a time when the English language's vocabulary was expanding rapidly but, while he had a rich vocabulary himself, it was on a par with other writers from the same time. Originality in language was not necessarily seen as a good thing in Shakespeare's time and he did not always use elaborate words with Latin roots- when he did, he often tended to follow them with an explanation in more straightforward English.

"However, his grammatical skill shows even more dexterity with language. He wrote during a transitional period for English grammar when there was a range of grammatical options open to writers- much of the grammar he chose now seems old-fashioned but it lends poetry to commonplace words and, significantly, while his spelling is often updated, his grammar is not."

In the article, Dr Hope compares Shakespeare's rate of word use in relation to plays written with the goalscoring rate of three Newcastle United FC strikers- Malcolm Macdonald, Jackie Milburn and Alan Shearer. He shows that, while Macdonald played significantly fewer games and scored fewer goals (121 in 228 games) than either Milburn (200 goals in 397 games) or Shearer (206 goals in 395 games), the scoring rates of the three players- 0.531, 0.504 and 0.522 goals per game respectively- are broadly the same. Similarly, Shakespeare used more words than his contemporaries but wrote more plays, leading to a word rate close to theirs.

Dr Hope's article, Shakespeare and the English Language, appears in an Open University collection, "English in the World: History, Diversity, Change," edited by Philip Seargeant and Joan Swann (Routledge in association with The Open University).

Shakespeare's skill 'more in grammar than in words' 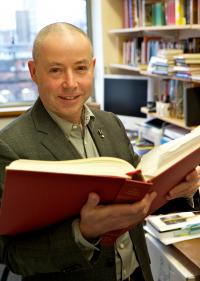