A new system for delivering a drug to organ transplant patients, which could avoid the risk of harmful side effects, is being developed by scientists at the University of Strathclyde in Glasgow.

The drug, cyclosporine (CsA), is widely used in transplant operations and helps prevent the patient's body rejecting the organ but it can cause adverse drug reactions, of which the most serious problems are kidney and liver damage, in the doses which are currently administered in the long term.

The gap between a safe, effective dose of the treatment and a toxic dose is extremely narrow but the Strathclyde scientists have found a way of capturing CsA in very small amounts. The new system, developed in laboratory tests, enables nanoparticles of the drug to be delivered orally so that the strength of the dose can be maintained, but at a level and in a form which spares kidneys from damage.

Professor Ravi Kumar, of the Strathclyde Institute of Pharmacy and Biomedical Sciences, led the research. He said: "CsA is very useful in transplants and treating conditions such as arthritis, lupus and some forms of diabetes, but we need to address the risks it can present to the kidney and liver, apart from various other toxicities such as convulsions and high blood pressure.

"The damage it can cause can be dealt with if it's caught at an early stage but can be irreversible if it continues unchecked. Furthermore, existing formulations of cyclosporine contain castor oil-based vehicle which is used owing to the drug's poor solubility in water but which can be toxic.

"By entrapping CsA in nanoparticles, we aimed to match the maximum concentration of the most potent formulation of the drug in market. In tests, we were able to strike a balance between strength, efficacy and safety and were able to make a marked increase in the drug's bioavailability- the level of the drug which becomes active in the system.

"We were also able to reduce the toxic effects on the kidneys by slow release of the nanoparticles, which brought the drug gradually to its maximum concentration.

"As well as its use in transplants, we hope to look into the effectiveness of this system with arthritis and address what is a hugely debilitating condition for many people."

The research paper has been published in the Journal of Biomedical Nanotechnology.

Further current research is aimed at proving the therapeutic efficacy and long-term safety of cyclosporine, with a special focus on the safety of carriers- polymers used in the formulation- to fulfil regulatory requirements. The safety studies element of the research has been funded by the Cunningham Trust Scotland and will conclude early in 2013.

The research forms part of Health Technologies at Strathclyde- one of the principal themes of the University's Technology and Innovation Centre (TIC), a world-leading research and technology centre transforming the way universities, business and industry collaborate.

Through Health Technologies at Strathclyde, academics work with industry and the health sector to find technologies for earlier, more accurate disease detection and better treatments, as well as life-long disease prevention.

System to deliver organ transplant drug -- without harmful side effects 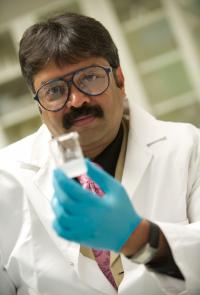