Insects, equipped with complex compound eyes, can maintain a constant heading in their travels, some of them for thousands of miles. New research demonstrates that fruit flies keep their bearings by using the polarization pattern of natural skylight, bolstering the belief that many, if not all, insects have that capability.

"If you go out in a field, lie on your back and look up at the sky, that's pretty much what an insect sees," said Michael Dickinson, a University of Washington biology professor. "Insects have been looking up at this view forever."

Dickinson is the senior author of a paper providing details on the findings, published Jan. 10 in the journal Current Biology. The lead author is Peter Weir, a doctoral student at the California Institute of Technology.

The researchers noted that insects such as monarch butterflies and locusts maintain a constant heading while migrating thousands of miles across continents, while bees and ants hunting for food successfully find their way hundreds of feet back to the nest without a problem. That has led scientists to believe that the animals must possess a compass of sorts.

To assess how insects orient themselves, Weir and Dickinson examined the behavior of Drosophila melanogaster, a species commonly referred to as a fruit fly, in outdoor lighting conditions in a specially designed "arena" atop a building tall enough to be higher than treetops and other visual landmarks.

The researchers used a light-cured glue to attach the insects to a metal pin, which was then placed within a magnetic field that allowed the flies to move and rotate naturally but held them in place. Digital cameras tracked flight headings.

During the hour before and the hour after sunset, the headings of flies relative to the position of the arena were recorded for 12 minutes. The arena was rotated 90 degrees every three minutes, and when natural light was not altered by optical filters some of the flies compensated for the rotations and maintained a consistent heading.

When the arena was covered with a circularly polarizing filter, eliminating natural linear polarization light patterns, the flies did not shift their heading significantly in response to arena rotations.

The results indicate Drosophila has the ability to coordinate eye and brain functions for rudimentary navigation using light polarization patterns, the researchers concluded. The flies are able to hold a straighter course under normal polarization patterns than they can when those patterns are shifted.

The next step in the research is to try to determine why the flies select a particular heading.

"It's been very hard to study these processes because animals such as butterflies and locusts used in previous studies are not standard lab models," Dickinson said. "We know something about the processes, but not that much."

Demonstrating that fruit flies can navigate using cues from natural skylight makes it easier to use genetics research to better understand the complex capability and exactly how it is implemented in the brain.

For millennia, seafarers have depended on the sun to know their position in the world, but often the sun is not visible. Polarization vision solves that problem, Dickinson said, because if there's even a small patch of clear sky in a fruit fly's very broad range of view then the natural light patterns can provide location information.

He noted that fruit flies "achieve remarkable functionality" with limited resources in their brains. There are 300,000 neurons in a fruit fly's brain, and it would take 300,000 fruit flies to reach the equivalent number of neurons in the human brain.

"A lot of our research is focusing on how the fruit fly brain is multitasking in space and time to achieve remarkable effects," Dickinson said.

Video: http://youtu.be/f1zP6cmiC6Y
Caption: A fruit fly (Drosophila melanogaster) executes a "body saccade," or a quick turn, in an arena similar to the one used in a polarization study by Michael Dickinson of the University of Washington and Peter Weir of the California Institute of Technology. (Credit: John Bender)

Fruit flies watch the sky to stay on course 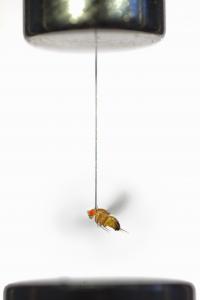