National parks often are established to help preserve species native to a particular region, but it appears that some species preservation is more successful if a significant portion of land adjacent to a park also is left as natural habitat.

The Cerrado region in Brazil has been identified as the most biologically diverse savanna on Earth, and Emas National Park is an important protected area for populations of wide-ranging large mammals such as giant anteaters, jaguars and puma.

But at about 500 square miles, the park is too small on its own to protect those species, said Carly Vynne, director of wildlife and habitat for the National Fish and Wildlife Foundation, who studied the effect of land-use changes on mammals in the Cerrado as part of her University of Washington doctoral work.

A major concern is that areas around the park are rapidly being converted to farmland, making the park more like "an island in a sea of agriculture," Vynne said.

A Brazilian law requiring landowners to leave 20 percent of their farms' original vegetation intact could be key in preservation efforts, giving the animals significantly more room to roam outside the park, though there are some efforts to change that.

The effect of the law is to create "an interesting mosaic" combining a well-managed preserve linked to a network of forested river corridors and patches of woodland left intact on adjacent private land, Vynne said.

She led a team that studied how keeping some private land in natural habitat affected preservation efforts in the Cerrado, and the work was published last month in PLoS One, a journal of the Public Library of Science.

"We often hear about the bison trying to leave Yellowstone (National Park), or the grizzlies trying to move out. This was the same kind of situation," she said.

The researchers gathered evidence on the range and habitat favored by five species of large mammals - jaguar, puma, giant anteater, giant armadillo and maned wolf - in 2004 and again from 2006 through 2008. Using a team of dogs from the Center for Conservation Biology's famed troupe of scat-hunting conservation canines, the scientists gathered scat from each species and pieced together profiles of areas the animals tended to inhabit.

They found that the giant armadillos and jaguars favored the protected habitat of the park, possibly because they are more sensitive to disturbances involved with working agricultural land outside the park.

"The jaguars and the giant armadillos need 50 percent natural area for the habitat to be effective," Vynne said. For the other species, "just having habitat available outside the park allows them to use the landscape as a whole."

The finding comes at a time when some are trying to reduce the amount of land property owners in the Cerrado must keep in natural habitat, or to allow them to alter the use of their land near the park in exchange for keeping land elsewhere in its natural state.

"Reducing the land near the park that is left in natural habitat would likely have pretty significant implications," Vynne said.

She noted that already some agriculture land is being converted to sugar cane from soy beans, again altering the habitat and potentially changing significantly how the large mammals can use the area.

Coauthors of the PLoS One paper are Jonah Keim of Matrix Solutions Inc. of Edmonton, Alberta; Ricardo Machado and Jader Marinho-Filho of Brazil's University of Brasilia; Leandro Silveira of Brazil's Jaguar Conservation Fund; and Martha Groom and Samuel Wasser of the UW. The project was funded by the Morris Animal Foundation. 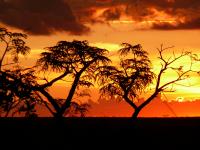