DALLAS - Jan. 20, 2012 - The health benefits of exercise on blood sugar metabolism may come from the body's ability to devour itself, UT Southwestern Medical Center researchers report in the journal Nature.

Autophagy is a process by which a cell responds to starvation and other stresses by degrading damaged or unneeded parts of itself to produce energy. It is sometimes called the cell's housekeeping pathway.

Dr. Levine, a Howard Hughes Medical Institute (HHMI) investigator at the medical center, decided to focus on one specific health effect of exercise - the ability of exercise to prevent blood sugar abnormalities in the face of a high-fat diet. Her mouse study provides the first evidence that exercise stimulates autophagy.

The researchers found that mice genetically unable to increase autophagy in response to short-term exercise have decreased endurance and fail to experience the normal benefits of exercise on blood sugar metabolism.

This discovery led the team to investigate whether autophagy is important in the protective effects of chronic exercise on diabetes. A high-fat diet induced diabetes-like changes in blood sugar metabolism in both control mice and in test mice that were genetically unable to increase autophagy above baseline levels, said Dr. Congcong He, lead author and a postdoctoral researcher in Dr. Levine's lab. However, the researchers found that exercise reversed these blood sugar abnormalities in control mice but not in the autophagy-deficient mice.

"Our finding that exercise fails to improve glucose metabolism in autophagy-deficient mice strongly suggests that autophagy is an important mechanism by which exercise protects against diabetes," said Dr. Levine. "It also raises the possibility that activation of autophagy may contribute to other health benefits of exercise, including protection against cancer, neurodegenerative diseases and aging.

Dr. Levine has made fundamental discoveries previously that are in large part credited for expanding the field of autophagy research. In 1999, she identified the first mammalian autophagy gene, beclin 1, and its link to the suppression of breast cancer, which marked the first discovery of an association between defects in an autophagy gene and a human disease.

She similarly is credited with demonstrating that autophagy functions in innate immunity - protecting against lethal viral encephalitis - as well as initially reporting that autophagy plays a role in lifespan extension, shown in a study of C. elegans worms.

Researchers from the Dana-Farber Cancer Institute, Washington University and the University of California at San Francisco also contributed.

The study was funded by grants from the National Institutes of Health and the HHMI.

This news release is available on our World Wide Web home page at www.utsouthwestern.edu/home/news/index.html

To automatically receive news releases from UT Southwestern via email, subscribe at www.utsouthwestern.edu/receivenews

Health benefits of exercise may depend on cellular degradation, UT Southwestern researchers report 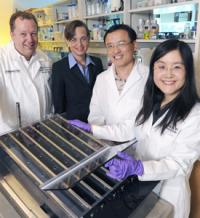