Planets can orbit a star for billions of years. Electrons circling the atomic nucleus are often visualized as tiny planets. But due to quantum effects, the behavior of atoms usually differs significantly from planetary systems. Austrian and US-American scientists have now succeeded in keeping electrons on planet-like orbits for a long time. This was done using an idea from astronomy: Jupiter stabilizes the orbits of asteroids (the so called "Trojans"), and in a very similar way, the orbits of electrons around the nucleus can be stabilized using an electromagnetic field. The results of this experiment have now been published in the journal Physical Review Letters.

They are probably the largest atoms on earth: "The diameter of the electronic orbits is several hundredths of a millimeter - an enormous distance on an atomic scale", says Shuhei Yoshida (Vienna UT). The atoms are even larger than erythrocytes. Yoshida made the calculations at Vienna University of Technology, the experiment was carried out at Rice University in Houston (Texas).

The Electron is not a Planet

The idea that atoms are similar to planetary systems dates back to Niels Bohr: he came up with the first atomic model, in which electrons circle the nucleus in well-defined orbits. This view, however, is now seen to be outdated. In quantum physics, the electron is described as a quantum wave, or a "probability cloud", that surrounds the atomic nucleus. The location of an electron in the ground state (the lowest possible energy level) is not well defined. Relative to the nucleus, it is situated in all possible directions at the same time. Asking about its "real position" or its orbit just does not make sense. Only if the electron is transferred into a state of higher energy, it can be manipulated in such a way that it moves along orbit-like paths.

Jupiter's trick - Used for the Atom

Unlike planets, electrons will not keep moving in such an orbit for ever. "Without additional stabilization, the electron-wave would become delocalized after a few cycles", says Professor Joachim Burgdörfer, head of the Institute for Theoretical Physics at Vienna UT. A simple idea on how to stabilize orbits has been known in astronomy for a long time: the gravity of Jupiter, the heaviest planet in our solar system, stabilizes the orbits of the "Trojans" - thousands of small asteroids. They aggregate around so-called "Lagrange points" on Jupiter's orbital path. Staying close to these Lagrange points, the asteroids circle the sun together with the planet - with exactly the same orbital velocity, so that the asteroids never collide with Jupiter.

In the experiment, the stabilizing influence of Jupiter's gravity is substituted by a cleverly designed electromagnetic field. The field oscillates precisely with the frequency corresponding to the orbital period of the electron around the nucleus. It sets the pace for the electron, and that way the electron-wave is kept at a specific point for a long time - much like a large number of asteroids, staying close to Jupiter's Lagrange points on their orbit around the sun. Quantum physics even allows manipulations which are impossible in a planetary system: using the electromagnetic field, the electron can by shifted into a different orbit - as if the orbit of Jupiter and its asteroids was suddenly shifted to the orbit of Saturn.

The physicists succeeded in creating an atomic miniature version of a solar system and preparing atoms which are remarkably close to the historic Bohr model. In future, the researchers want to prepare atoms in which several electrons move on planetary orbits at the same time. Using such atoms, it should be possible to investigate in greater detail how the quantum-world of tiny objects corresponds to the classical world as we perceive it.

Jupiter's 'Trojans' on an atomic scale 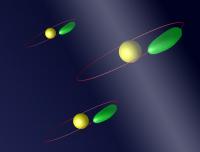