An international team of scientists has found one of the rarest and least known primates in Borneo, Miller's Grizzled Langur, a species which was believed to be extinct or on the verge of extinction. The team's findings, published in the American Journal of Primatology, confirms the continued existence of this endangered monkey and reveals that it lives in an area where it was previously not known to exist.

Miller's Grizzled Langur (Presbytis hosei canicrus) is part of the small primate genus Presbytis, found across Borneo, Sumatra, Java and the Thai-Malay Peninsula. In Borneo, P.h. canicrus is only found in a small corner of the county's north east and its habitat has suffered from fires, human encroachment and conversion of land for agriculture and mining.

The team's expedition took to them to Wehea Forest in East Kalimantan, Borneo, a large 38,000 ha area of mostly undisturbed rainforest. Wehea contains at least nine known species of non-human primate, including the Bornean orangutan and gibbon.

"Discovery of P.h canicrus was a surprise since Wehea Forest lies outside of this monkey's known range. Future research will focus on estimating the population density for P.h. canicrus in Wehea and the surrounding forest," said Brent Loken, from Simon Fraser University Canada. "Concern that the species may have gone extinct was first raised in 2004, and a search for the monkey during another expedition in 2008 supported the assertion that the situation was dire."

By conducting observations at mineral licks where animals congregate and setting up camera traps in several locations, the expedition confirmed that P. h canicrus continues to survive in areas west of its previously recorded geographic range. The resulting photos provide the first solid evidence demonstrating that its geographic range extends further than previously thought.

"It was a challenge to confirm our finding as there are so few pictures of this monkey available for study," said Loken. "The only description of Miller's Grizzled Langur came from museum specimens. Our photographs from Wehea are some of the only pictures that we have of this monkey."

"East Kalimantan can be a challenging place to conduct research, given the remoteness of many remaining forested areas, so it isn't surprising that so little is known about this primate," said Dr. Stephanie Spehar, Assistant Professor of Anthropology at University of Wisconsin Oshkosh. "We are very grateful to our local partners. This discovery represents the hard work, dedication, and collaboration of Western and Indonesian scientists, students, NGOs, as well as local communities and government."

"While our finding confirms the monkey still exists in East Kalimantan, there is a good chance that it remains one of the world's most endangered primates," concluded Loken. "I believe it is a race against time to protect many species in Borneo. It is difficult to adopt conservation strategies to protect species when we don't even know the extent of where they live. We need more scientists in the field working on understudied species such as Miller's Grizzled Langur, clouded leopards and sun bears." 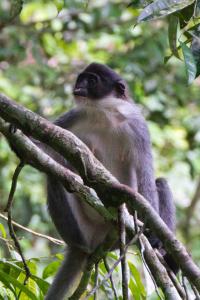 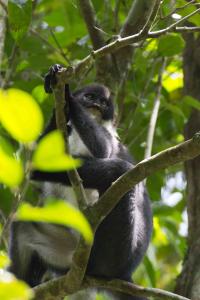