Archaeologists examining late period Mayan containers have identified nicotine traces from a codex-style flask, revealing the first physical evidence of tobacco use by ancient Mayans. The study published in Rapid Communications in Mass Spectrometry reveals the flask is marked with Mayan hieroglyphics reading, "y-otoot 'u-may," ("the home of its/his/her tobacco,") making it only the second case to confirm that the text on the exterior of a Mayan vessel corresponds to its ancient use.

"Investigation of food items consumed by ancient people offers insight into the traditions and customs of a particular civilization," explains Jennifer Loughmiller-Newman from the University at Albany in New York. "Textual evidence written on pottery is often an indicator of contents or of an intended purpose, however actual usage of a container could be altered or falsely represented."

Many of the Mayan flask vessels from the Kislak collection of the Library of Congress examined in this study were filled with other substances, such as iron oxide used in burial rituals, making it difficult to detect the original content.

The most indisputable evidence of a container's usage is obtained when hieroglyphic text or pictorial illustrations on the exterior of a container is consistent with the chemical analysis of interior residues. For the current investigation, researchers analyzed samples extracted from the Late Classic Maya period (600 to 900 AD) using gas chromatography mass spectrometry (GCMS) and liquid chromatography mass spectrometry (LCMS).

Nicotine--the signature alkaloid in tobacco--was identified as the major component of the extracts from one of the 150 vessels in the collection. The flask was determined to be made in southern Campeche, Mexico and dates to around 700 AD.

Prior to the current discovery, the only existing evidence showing a Mayan vessel to have the same content as indicated by hieroglyphic text was the identification of theobromine, an alkaloid found in cacao, more than 20 years ago.

"Our study provides rare evidence of the intended use of an ancient container," concludes Dr. Dmitri Zagorevski from the Rensselaer Polytechnic Institute in Troy, New York. "Mass spectrometry has proven to be an invaluable method of analysis of organic residues in archaeological artifacts. This discovery is not only significant to understanding Mayan hieroglyphics, but an important archaeological application of chemical detection." 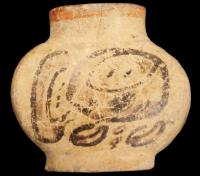