Wildlife health experts from the Wildlife Conservation Society have published evidence which supports the conclusion that Mongolian gazelles--one of the most populous large land mammals on the planet--are not a reservoir of foot-and-mouth disease (FMD), a highly contagious viral disease that threatens both wildlife and livestock in Asia.

Outbreaks of FMD in Mongolia affect domestic sheep, goats, camels, and cattle as well as Mongolian gazelles. In a country where roughly one-third of the human population relies directly on livestock production for their subsistence, outbreaks of FMD cause severe disruption of the rural economy.

The study, titled "Serosurveillance for Foot-and-Mouth Disease in Mongolian Gazelles (Procapra gutturosa) and Livestock on the Eastern Steppe of Mongolia," appears in the January edition of the Journal of Wildlife Diseases. The authors include: Sanjaa Bolortsetseg, Shiilegdamba Enkhtuvshin, Wendy Weisman, Amanda Fine, Angela Yang, and Damien Joly of the Wildlife Conservation Society; and D. Nyamsuren of the Dornod Aimag Veterinary Laboratory, Choibalsan, Dornod Province, Mongolia.

The Mongolian gazelle is a medium-sized antelope with a heart-shaped patch of white fur on its rump. The species gathers in vast migratory herds across Mongolia's Eastern Steppe, considered the largest intact temperate grassland in the world. The gazelle is under pressure from a variety of threats, particularly exploration for oil, gas, and minerals.

The research culminates a decade-long effort to examine the potential role of the gazelles in FMD ecology. In the recently published study (undertaken between 2005-2008), the research team collected blood samples from 36 gazelle calves and 57 adult gazelles in order to determine the prevalence of antibodies to the foot-and-mouth virus (FMDV). The team also collected samples from domestic animals kept in areas frequented by gazelles, including 138 sheep, 140 goats, 139 Bactrian camels, and 138 cattle for comparison.

"The successful control of foot-and-mouth disease on the Eastern Steppe will require a program that focuses on livestock populations and entails health monitoring and vaccinations of domestic animals when needed," said WCS veterinary epidemiologist and co-author Shiilegdamba Enkhtuvshin. 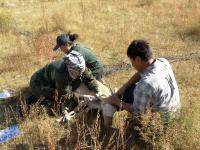