A new suite of malaria maps has revealed in unprecedented detail the current global pattern of the disease, allowing researchers to see how malaria has changed over a number of years.

In a study published in the Malaria Journal, a multinational team of researchers from the Malaria Atlas Project (MAP), funded mainly by the Wellcome Trust, present the results of a two-year effort to assemble all available data worldwide on the risk of Plasmodium falciparum malaria, the most deadly form of the disease. Using computer modelling and data on climate and human populations, they have revealed the complex landscape of malaria across the globe. The maps build on the first ever Atlas of Malaria-Eliminating Countries published earlier this year.

Malaria continues to exert an huge burden of illness and death worldwide but, after decades of neglect, the war against the disease has entered an unprecedented era: it is high on the policy agenda, international funding is beginning to translate into real increases in populations protected by bed nets and other key interventions, and a growing body of evidence points towards important reductions in illness and death.

The maps have been made freely available, along with a wide range of other malaria resources via the launch of a new online portal at www.map.ox.ac.uk. The research was led by Dr Pete Gething from the Department of Zoology at the University of Oxford. He says: "These new maps and our online portal are really aimed at everyone involved in the battle against the disease: from the major international organisations and funders, to other scientists, to those actually doing the disease control work on the ground."

However, in order to allocate funding where it is most needed, accurate maps detailing where the disease is most intense and where the largest concentrations of people at risk are found. The new maps reveal for the first time the startling variations in malaria risk, even over short distances.

Dr Simon Hay, who leads the MAP group in Oxford, explains: "It's increasingly clear that malaria transmission is extremely heterogeneous. This means a one-size-fits all approach to controlling is not appropriate. What works in one place might not work elsewhere. These maps are designed to help unravel that complexity and provide a practical guide to help target resources."

Sir Richard Feachem, Director of the Global Health Group at the University of California, San Francisco, and Chair of the Malaria Elimination Group has welcomed the role the new maps can play in pursuing malaria elimination. He says: "From the perspective of elimination, the key message is that malaria transmission is actually very low across large swathes of the endemic world - including the 36 countries currently engaged in elimination programmes. Mapping transmission levels in detail helps to guide these initiatives and highlights how, with concerted effort and sustained financing, we can continue to shrink the malaria map."

New malaria maps to guide battle against the disease 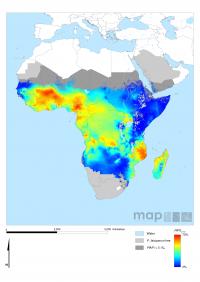