NASA has announced that Raymond E. Arvidson, PhD, the James S. McDonnell Distinguished University Professor in Earth and Planetary Sciences in Arts & Sciences at Washington University in St. Louis, has been selected to be a participating scientist on the Mars Science Laboratory, a mission to land and operate a rover named Curiosity on the surface of Mars.

Arvidson proposed to NASA that he use the rover itself as a terramechanics instrument to learn about Martian soils. Terramechanics is the study of soil properties, especially those revealed by driving a vehicle over different terrains.

His proposal was one of 29 selected from among 149 vying for a coveted participating scientist spot on the rover team.

His co-investigator will be Karl Iagnemma, PhD, a principal research scientist at the Massachusetts Institute of Technology (MIT) and a terramechanics expert.

Arvidson says the project has both operational and scientific purposes.

The operational purpose is to help Curiosity chart the best path across the Martian terrain, avoiding sand traps and slippery slopes, and the scientific purpose is to study crusted soils.

Crusted soils are of interest both because rovers can break through the crusts and become mired in the softer soils they conceal, but also because they are created by the meager modern remains of the Martian water cycle, which is of considerable interest because water is a key ingredient of potentially habitable environments.

The biggest and the baddest of the rovers

Arvidson has been a faithful attendant to the twin Spirit and Opportunity rovers since they landed on opposite sides of Mars in January 2004. They completed their primary missions in three months and went into overtime work in April 2004.

Spirit broke through a crusted soil at an area called "Columbia Hills" in April 2009 and became mired in the underlying soils. Because its solar panels were tilted in an unfavorable direction, it eventually lost power and stopped communicating.The Spirt mission was officially declared over in May 2011.

Opportunity, however, continues to roam Mars and is now exploring the rim of an ancient crater called Endeavour, where it has just made some interesting finds.

Currently in transit to Mars, Curiosity is scheduled to land on Aug. 6, 2012. Five times larger than Spirit or Opportunity, it carries much more sophisticated analytical equipment.

Whereas Spirit and Opportunity were powered by the sun, Curiosity is powered by plutonium and can operate night and day. Its expected lifetime is also much longer: 23 Earth months (one Martian year). Unlike its predecessors, its mission is not only to search Mars for water, but also to investigate other evidence of potentially habitable environments.

Arvidson's team will scout out territory for Curiosity using a dynamic computer model of the rover that can simulate Curiosity driving over Martian topography and soils.

The model will be similar to Artemis, a three-dimensional dynamic model originally developed jointly by Arvidson and colleagues at Washington University and the Jet Propulsion Laboratory (JPL) to try to help the Spirit rover get out of the sand trap in which it became mired in spring 2009.

"When we drive the rover," Arvidson says, "we make a topographic map of the surface using data both from orbital instruments and from the rover's cameras. Every two seconds we also record the rover's yaw, pitch and roll, and motor currents, and we evaluate how much the wheels are sinking and how much the vehicle is drifting or slipping.

"For the simulations, we shrink a topographic map to the appropriate scale, drop the simulated rover on it, and drive it using a series of commands just as engineers drive the rovers on Mars.

"Each spot on the topographic model is associated with a particular type of bedrock or of soil that has a certain stickiness or looseness -- and perhaps a crust.

"We work with our colleagues at MIT and JPL to calibrate the soil parameters," Arvidson says. "The MIT lab has an instrumented Opportunity spare wheel -- a flight wheel that we didn't send to Mars -- and they're running it back and forth through soils to better establish the link between rover dynamics and soil types.

"Once the rover simulation model for Curiosity has been developed, it will be validated by driving a full-scale engineering model of the rover around the Mars Yard, a mocked-up Martian landscape at the Jet Propulsion Laboratory. The engineering model is about a third the weight of the flight model because gravity on Earth is three times stronger than on Mars.

"When Curiosity lands on Mars," Arvidson says, "we'll drive our computer model on the same traverses as Curiosity and adjust the soil properties in the simulation until we get a good match with Curiosity's dynamics. Then we'll know what we're up against.

"In that way, we can contribute to path planning for the Curiosity rover," Arvidson says.

Arvidson was alerted to the dangers -- but also the scientific interest -- of crusted soils by an episode in April 2009, when the Spirit rover was commanded to drive backward through a valley at a location now known as Troy.

The terrain looked innocuous enough, but the rover's wheels broke through a surface crust and became embedded in underlying sand at what turned out to be the inner wall of an eight-meter-wide sand-filled crater.

Frustrating as this was, the rover team was intrigued when the floundering rover revealed much lighter soils beneath the dark crust.

Tools on Spirit's robotic arm were used to examine the composition of the different layers of the soil closely.

It turned out that the reddish crust consisted of minerals such as hematite that are less soluble in water than the relatively soluble ferric sulfate sands beneath them.

This soil profile was consistent with water slowly moving dissolved material down the soil column.

"It wouldn't take much water to sort minerals in this way," Arvidson says. Even skimpy processes, such as partial melting of dirty snow when the Martian poles are tipped toward the Sun, might be enough to do it.

As the simulated Curiosity rover refines its knowledge of crusted soils, Arvidson hopes to use CRISM, a multispectral imager aboard the Mars Reconnaissance Orbiter, to find other patches of these crusted soils.

"If we can identify where they are, we can drive the rover to them, 'toe dip' into them and expose the subsurface," he says.

Curiosity will then be able to use its armamentarium of analytical equipment to analyze the soils.

"What we'll be doing is characterizing the Mars water cycle," Arvidson says. 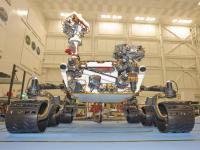