A giant experiment is under way at the Tyson Research Center, Washington University in St. Louis' 2,000-acre outdoor laboratory for ecosystem studies.

The experiment, led by Tiffany Knight, PhD, associate professor of biology in Arts & Sciences, will test three different variables in 32 glades with the goal of establishing best practices for restoring not just degraded glade habitats but degraded ecosystems in general.

"These glade restorations are going to be a really significant scientific resource, not just for people at Washington University but for people both nationally and internationally," says Barbara Schaal, PhD, professor of biology and director of the Tyson Research Center.

"The opportunity to do giant manipulations and experiments is really rare, and we expect this experiment is going to draw researchers from all over the world," Schaal says.

Missouri glades, which ecologists sometimes call sunlit islands in a forested sea, are areas of exposed bedrock in the Ozark woodlands that create their own hot, dry, desert-like microclimates and have their own unique mixture of species, including tarantulas, scorpions, and prickly pear cactus.

Before people settled the area, glades covered the Ozark mountain hilltops and oaks nestled in the valleys between ridges. When fires were suppressed after World War II, eastern red cedar -- once confined to river bluffs -- and rock outcrops invaded the glades, completely altering the character of these habitats and the mixture of species that lived there.

Knight's group prepared for restoring the Tyson glades by surveying about 30 other glade restorations elsewhere in the state. "We expected smaller stored glades to have fewer species than larger glades, but we found that they had even fewer than we expected and they were also more impoverished in rare species than we expected," Knight says.

So they decided to find out why by running the restoration of 32 glades at Tyson as a scientific experiment, complete with treatment groups and control groups.

"Glades are biodiversity treasure chests," Knight says. "This study focuses on a unique Ozark glade ecosystem that has been a home to many rare and endangered species found nowhere else in the world.

"Our results will have important implications for understanding and trying to mitigate biodiversity loss from small habitats, especially loss of rare species."

On the way to the fire

In 2009, areas at the Tyson Research Center that had historically been glades were cleared by ax and chainsaw. These openings are now being maintained -- as they traditionally were -- by fire.

The prescribed burns began the week of Jan. 9, 2012. With weather conditions perfect, the glades were being burned, at the rate of about two a day. Knight picked up the videographer and reporter at the research center to drive them to the fire site.

"Usually there are several clues that an area was a glade," Knight said over the rumble of the pickup. "When you're driving along, you'll see big boulders and rocks right on the surface of the soil. What that tells us is the soil is really shallow, which is characteristic of a glade habitat.

"Another thing you'll notice, especially in aerial photographs taken in winter, is eastern red cedar. The southwestern corner of the Tyson Research Center is covered with it. Eastern red cedar is the first plant to encroach on glades in the absence of fire. If fire is suppressed, eastern red cedar comes in, gets established, and allows the glade habitat to succeed into a forest.

"Another telltale sign is plants that are remnants of glades. I'd be walking through the forest doing other research," Knight says, "and I would notice plant species like cactus in the middle of the forest. It was clearly a species just trying to hang on, waiting for the day when the habitat became a glade again.

"All of these are good indicators that an area was a glade historically," she says.

By now we had arrived at the next glade to be burned, a big, round glade with a southern exposure that had been strewn with the seeds of glade-favoring species.

"Fire travels uphill," Knight says as we get out of the pickup, "so they burn the top of the hill first -- a small, low-intensity burn -- so that when they light the bottom and the fire moves up, there's no way for it to ignite the slash (piles of timber and brush) left over from glade clearing."

The crews are motley: half pros, half students. One of the teams is led by John Timmerman, a retired firefighter who now does prescribed burns. Another is led by John Wingo, a contractor whose business is ecological restoration. They wield the drip torches and leaf blowers (used to extinguish small flames).

Even though it's winter break students are scraping out the fire break around the glade and are raking embers back into burning piles of vegetation.

"My only job at these fires," Knight says, "is to look outside the fire circle and make sure flying sparks haven't set anything alight.

"This glade was seeded," Knight says, walking by the flaming stalks of wooly mullein, "by a striking plant that is adapted to live in disturbed landscapes, but will eventually be outcompeted by returning glade species.

"We put in 50 species, and we went to extra effort to get some of the rarest species in there, some that are listed by the state or federal government as threatened and others that grow only in glade ecosystems."

Holly Bernardo, who has a master's degree in ecology and is a technician on the project, explains how they got the seeds. "There are some local seed houses," Bernardo says, "and -- their words, not mine -- they have a bunch of old hippies they send out to collect seeds for them. We tell them what we want, and they go find it and take care of all the permitting for us.

"Six or seven species we collected ourselves from the Missouri Botanical Garden's Shaw Nature Reserve because there are so many nice populations on its restored glades.

"The seed houses are pretty good for the normal stuff, general glade species that also grow in prairies and other habitats," Bernardo says. "Those are easy to get."

By now the glade has been reduced to patchy white ash and the crew is regrouping to move to the next glade to be burned.

The glades will be burned next year, and the year after that. There will be more ash next year, says Knight, when there is more plant biomass available to burn.

The National Science Foundation has funded the restoration experiment for five years, says Knight, the standard grant period. But this is really a 20- to 30-year experiment that will spawn other questions and smaller experiments to answer those questions.

"The Opuntia pads we put in this summer took really well," Bernardo says. "They grow really slowly, but we'll have some nice Opuntia populations in 20 years."

Knight is in it for the long haul. She plans to monitor plant communities in the glade ecosystems for decades, following several rare species. Additional experiments will test the importance of plant and animal interactions on biodiversity, such as the impact of mammal and insect predation.

Although the plants are the stars of this show, Knight already has initiated collaborations with other scientists to keep an eye on the animals -- at least the small ones.

James Trager, PhD, of the Missouri Botanical Garden, is monitoring the recovery of ant populations, and Mike Arduser, a bee specialist with the Missouri Department of Conservation, is interested in how long it will take for glade-endemic bees to return.

"This is stunning work," Schaal says. "Not only do we have the expanse of Tyson to experiment with, the design of the project is just simply clever, and we have the intellectual resources to really follow the research.

"It's a huge, clever project and I'm really excited about it," says Schaal.

Trial by fire: A landscape-scale experiment in restoring Ozark glades 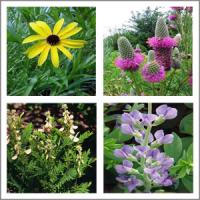