System 92S didn't have very strong winds when it passed over the coastal city of Vohemar on Madagascar's northeastern coast over the last couple of days, but street flooding was reported.

A rainfall analysis was made at NASA's Goddard Space Flight Center, Greenbelt, Md. using data from a near-real time Multi-satellite Precipitation Analysis (TMPA). TRMM-based near-real time Multi-satellite Precipitation Analysis (TMPA) data are used to monitor rainfall over the global Tropics. This analysis showed that during the past week the tropical cyclone contributed to flooding rainfall totaling over 280mm (~11 inches).

The TRMM satellite passed over this area on February 25, 2012 at 2025 UTC before this stormy area moved over northeastern Madagascar. Rainfall derived from TRMM's Microwave Imager (TMI) and Precipitation Radar (PR) instruments showed that numerous intense storms were dropping rainfall at a rate of over 50mm/hr (~2 inches). TRMM Precipitation Radar data also showed that some powerful storms within the area reached to heights of over 15 km (~9.3 miles).

On February 28, 2012 at 1011 UTC (5:11 a.m. EST) the Atmospheric Infrared Sounder (AIRS) instrument on NASA's Aqua satellite captured an infrared image of System 92S's eastern half, bringing rains to west-central Madagascar. The storm's center is over the waters of the Mozambique Channel and was not in line with the AIRS instrument's view. The eastern edge of the storm, however was bringing gusty winds and heavy rainfall to west-central Madagascar.

System 92S filled up the northern half of the Mozambique Channel, stretching from Madagascar in the east, to Mozambique to the west of the channel. Both places were experiencing gusty winds and moderate to heavy rainfall on February 28, as System 92S continues to consolidate and strengthen.

Visible imagery from NASA's Aqua satellite showed the bulk of System 92S's clouds were pushed to the west of its center, as a result of wind shear. Because water vapor imagery revealed a lot of moisture over the Mozambique Channel, and the sea surface temperatures are well over the 26.6C (80F) threshold needed to maintain a tropical cyclone, conditions are improving for further development. Wind shear is also expected to ease, which will help with further intensification as System 92S moves further into the Mozambique Channel.

The Joint Typhoon Warning Center gives System 92S a high chance for becoming a tropical depression in the next 24 hours. 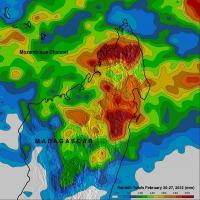 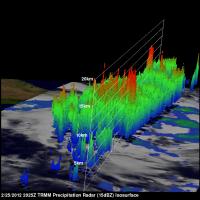