When a proton - the bare nucleus of a hydrogen atom - transfers from one molecule to another, or moves within a molecule, the result is a hydrogen bond, in which the proton and another atom like nitrogen or oxygen share electrons. Conventional wisdom has it that proton transfers can only happen using hydrogen bonds as conduits, "proton wires" of hydrogen-bonded networks that can connect and reconnect to alter molecular properties.

Hydrogen bonds are found everywhere in chemistry and biology and are critical in DNA and RNA, where they bond the base pairs that encode genes and map protein structures. Recently a team of researchers using the Advanced Light Source (ALS) at the U.S. Department of Energy's Lawrence Berkeley National Laboratory (Berkeley Lab) discovered to their surprise that in special cases protons can find ways to transfer even when hydrogen bonds are blocked. The team's results appear in Nature Chemistry.

A group led by Musahid Ahmed, a senior scientists in Berkeley Lab's Chemical Sciences Division (CSD), has long collaborated with a theoretical research group at the University of Southern California (USC) headed by Anna Krylov. In recent work to understand how bases are bonded in staircase-like molecules like DNA and RNA, Krylov's group made computer models of paired, ring-shaped uracil molecules, and investigated what might happen to these doubled forms (dimers) when they were subjected to ionization - the removal of one or more electrons with resulting net positive charge.

Uracil is one of the four nucleobases of RNA, whose structure is similar to DNA except that, while both use the bases adenine, cytosine, and guanine, in DNA the fourth base is thymine and in RNA it's uracil. The USC group used a uracil dimer labeled 1,3-dimethyluracil - "a strange creature that doesn't necessarily exist in nature," says CSD's Amir Golan, who led the Berkeley Lab team at the ALS. The purpose of this strange creature, Golan says, is to block hydrogen bonding of the two identical monomers of the uracil dimer by attaching a methyl group to each, "because methyl groups are poison to hydrogen bonds."

The uracils could still bond in the vertical direction by means of pi bonds, which are perpendicular to the usual plane of bonding among the flat rings of uracil and other nucleobases. "Pi stacking" is important in the configuration of DNA and RNA, in protein folding, and in other chemical structures as well, and pi stacking was what interested the USC researchers. They brought their theoretical calculations to Berkeley Lab for experimental testing at the ALS's Chemical Dynamics beamline 9.0.2.

To examine how the molecules were bonded, Golan and his colleagues first created a gaseous molecular beam of real methylated uracil monomers and dimers, then ionized them with a beam of energetic ultraviolet light from the ALS synchrotron. The resulting species were weighed in a mass spectrometer to see how the uracil had responded to the extra boost of energy.

"Uracils could be joined by hydrogen bonds or by pi bonds, but these uracils had been methylated to block hydrogen bonds. So what we expected to see when we ionized them was that if they were bonded, they would have to be stacked on top of each other," Golan says. Instead of holding together by pi bonds, however, when ionized some uracil dimers had fallen apart into monomers that carried an extra proton.

Where the protons come from

"What we did not expect to see was proton transfer," Golan says. "Surprising as this was, we needed to find where the protons were coming from. The methyl groups consist of a single carbon atom and three hydrogen atoms, but methylated uracil has other hydrogens too. Still, the methyl groups were the natural suspects."

To test this hypothesis, the researchers invited colleagues from Berkeley Lab's Molecular Foundry to join the collaboration. They created methyl groups in which the hydrogen atoms - which like most hydrogen had single protons as their nuclei - were replaced by deuterium atoms, "heavy hydrogen" atoms with nuclei consisting of a proton and a neutron of virtually the same mass.

The molecular beam experiment was repeated at the ALS, and once again some of the methylated uracil dimers fell apart into monomers upon ionization. This time, however, the tell-tale monomers were not simply protonated, they were deuterated.

Says Golan, "By looking at the mass of the fragments we could see that instead of uracil plus one" - the mass of a single proton - "they were uracil plus two" - a proton and neutron, or deuteron. "This proved that indeed the transferred protons came from the methyl groups."

The experiment showed that proton transfer in this case followed a very different route from the usual process of hydrogen bonding. Here the transfer involved not just an attraction between molecular arrangements that were slightly positively charged and others that were slightly negatively charged, as in a hydrogen bond. Instead it required significant rearrangements of the two uracil dimer fragments, to allow protons of hydrogen atoms in the methyl group on one monomer to move closer to an oxygen atom in the other. Theoretical calculations of the new pathway were led by USC's Krylov and Ksenia Bravaya.

The moral of the story, says Golan, is that methyl groups do not always kill proton transfer. "Granted, this was a model system - what we did was ionize the uracil systems in the gas phase instead of in solution, as would be the case in a living organism," he says. "Nevertheless, we showed that proton transfer is possible without hydrogen-bonding networks. Which means there could be unsuspected pathways for proton transfer in RNA and DNA and other biological processes - especially those that involve pi-stacking - as well as in environmental chemistry and in purely chemical processes like catalysis."

The next step: a range of new experiments to directly map proton transfer rates and gain structural insight into the transfer mechanism, with the goal of visualizing these unexpected new pathways for proton transfer.

"Ionization of dimethyluracil dimers leads to facile proton transfer in the absence of H-bonds," by Amir Golan, Ksenia B. Bravaya, Romas Kudirka, Oleg Kostko, Stephen R. Leone, Anna I. Krylov, and Musahid Ahmed, is published by Nature Chemistry and appears in advance online publication at http://www.nature.com/nchem/index.html. Golan, Kostko, Leone, and Ahmed are with Berkeley Lab's Chemical Sciences Division, and Golan and Leone are also with the Departments of Chemistry and Physics at the University of California at Berkeley. Bravaya and Krylov are with the University of Southern California. Kudirka is with Berkeley Lab's Materials Sciences Division. This work was supported principally by the U.S. Department of Energy's Office of Science, and by the Department of Defense and the National Science Foundation.

For more about the Chemical Dynamics Beamline at the ALS, visit www.chemicaldynamics.lbl.gov.

The Advanced Light Source is a third-generation synchrotron light source producing light in the x-ray region of the spectrum that is a billion times brighter than the sun. A DOE national user facility, the ALS attracts scientists from around the world and supports its users in doing outstanding science in a safe environment. For more information visit www-als.lbl.gov/.

The Molecular Foundry is one of five DOE Nanoscale Science Research Centers (NSRCs), national user facilities for interdisciplinary research at the nanoscale, supported by the DOE Office of Science. Together the NSRCs comprise a suite of complementary facilities that provide researchers with state-of-the-art capabilities to fabricate, process, characterize, and model nanoscale materials, and constitute the largest infrastructure investment of the National Nanotechnology Initiative. For more information about the DOE NSRCs, please visit science.energy.gov.

DOE's Office of Science is the single largest supporter of basic research in the physical sciences in the United States, and is working to address some of the most pressing challenges of our time. For more information, please visit the Office of Science website at science.energy.gov/. 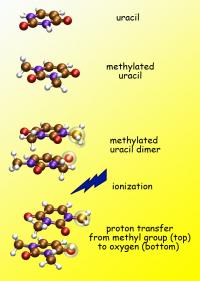