Production of energy from the difference between salt water and fresh water is most convenient near the oceans, but now, using an ammonium bicarbonate salt solution, Penn State researchers can combine bacterial degradation of waste water with energy extracted from the salt-water fresh-water gradient to produce power anywhere.

"We are taking two technologies, each having limitations, and putting them together," said Bruce E. Logan, Kappe Professor of Environmental Engineering. "Combined, they overcome the limitations of the individual technologies."

The technologies Logan refers to are microbial fuel cells (MFC)-- which use wastewater and naturally occurring bacteria to produce electricity -- and reverse electrodialysis (RED) -- which produces electricity directly from the salinity gradient between salty and fresh water. The combined technology creates a microbial reverse-electrodialysis cell (MRC). The researchers describe MRCs in today's (March 1) edition of Science Express.

RED stacks extract energy from the ionic difference between fresh water and salt water. A stack consists of alternating ion exchange membranes -- positive and negative -- with each RED membrane pair contributing additively to the electrical output. Unfortunately, using only RED stacks to produce electricity is difficult because a large number of membranes is required when using water at the electrodes, due to the need for water electrolysis.

Using exoelectrogenic bacteria -- bacteria found in wastewater that consume organic material and produce an electric current -- reduces the number of stacks needed and increases electric production by the bacteria.

Logan, working with Roland Cusick, graduate student in environmental engineering, and postdoctoral fellow Younggy Kim, placed a RED stack between the electrodes of an MFC to form the MRC.

While the researchers previously showed that an MRC can work with natural seawater, the organic matter in water will foul the membranes without extensive precleaning and treatment of the water. Seawater use restricts MRC operation to coastal areas, but food waste, domestic waste and animal waste contain about 17 gigawatts of power throughout the U.S. One nuclear reactor typically produces 1 gigawatt.

"Waste heat makes up 7 to 17 percent of energy consumed in industrial processes," said Logan. "There is always a source of waste heat near where this process could take place and it usually goes unused."

The researchers tested their ammonium bicarbonate MRC and found that the initial production of electricity was greater than that from an MRC using seawater.

"The bacteria in the cell quickly used up all the dissolved organic material," said Logan. "This is the portion of wastewater that is usually the most difficult to remove and requires trickling filters, while the particulate portion which took longer for the bacteria to consume, is more easily removed."

The researchers tested the MRC only in a fill and empty mode, but eventually a stream of wastewater would be run through the cell. According to Logan, MRCs can be configured to produce electricity or hydrogen, making both without contributing to greenhouse gases like carbon dioxide. The MRC tested produced 5.6 watts per square meter.

Logan also notes that not having to process wastewater would save about 60 gigawatts. 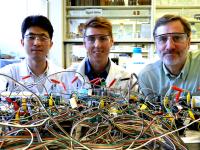