The adverse side effects of certain hepatitis C medications can now be replicated and observed in Petri dishes and test tubes, thanks to a research team led by Craig Cameron, the Paul Berg Professor of Biochemistry and Molecular Biology at Penn State University. "The new method not only will help us to understand the recent failures of hepatitis C antiviral drugs in some patients in clinical trials," said Cameron. "It also could help to identify medications that eliminate all adverse effects." The team's findings, published in the current issue of the journal PLOS Pathogens may help pave the way toward the development of safer and more-effective treatments for hepatitis C, as well as other pathogens such as SARS and West Nile virus.

First author Jamie Arnold, a research associate in Cameron's lab at Penn State, explained that the hepatitis C virus (HCV), which affects over 170,000,000 people worldwide, is the leading cause of liver disease and, although antiviral treatments are effective in many patients, they cause serious side effects in others. "Many antiviral medications for treating HCV are chemical analogs for the building blocks of RNA that are used to assemble new copies of the virus's genome, enabling it to replicate," he said. "These medications are close enough to the virus's natural building blocks that they get incorporated into the virus's genome. But they also are different in ways that lead to the virus's incomplete replication. The problem, however, is that the medication not only mimics the virus's genetic material, but also the genetic material of the patient. So, while the drug causes damage to the virus, it also may affect the patient's own healthy tissues."

A method to reveal these adverse side effects in the safety of a laboratory setting, rather than in clinical trials where patients may be placed at risk, has been developed by the research team, which includes Cameron; Arnold; Suresh Sharma, a research associate in Cameron's lab; other scientists at Penn State; and researchers from other academic, government, and corporate labs. "We have taken anti-HCV medications and, in Petri dishes and test tubes, we have shown that these drugs affect functions within a cell's mitochondria," Cameron explained. "The cellular mitochondria --- a tiny structure known as 'the powerhouse of the cell' that is responsible for making energy known as ATP -- is affected by these compounds and is likely a major reason why we see adverse effects." Cameron noted that scientists have known for some time that certain individuals have "sick" mitochondria. Such individuals are likely more sensitive to the mitochondrial side effects of antiviral drugs.

"We know that antiviral drugs, including the ones used to treat HCV, affect even normal, healthy mitochondria by slowing ATP output," Arnold added. "While a person with normal mitochondria will experience some ATP and mitochondrial effects, a person who is already predisposed to mitochondrial dysfunction will be pushed over the 'not enough cellular energy' threshold by the antiviral drug. The person's mitochondria simply won't be able to keep up."

One of the problems with clinical trials, Arnold explained, is that a drug may be shown to be quite effective but, if even a miniscule percentage of patients have side effects, the U.S. Food and Drug Administration is obligated to put the trial on hold or stop the trial altogether. This possibility makes drug companies reluctant to invest money in drug trials after an adverse event has been observed, even when the drugs could still help millions of people. The researchers hope that their methods eventually will become a part of the pre-clinical development process for this class of antiviral drugs. "If we can show, in the lab, that a drug will cause side effects, then these compounds will not enter lengthy, expensive clinical trials and cause harm to patients " he said. "What's more, a drug company can invest its money more wisely and carefully in drug research that will produce safe and effective products. Better and more-willing investments by drug companies ultimately will help patients, because resources will be spent developing drugs that not only work, but that are safe for all patients."

Cameron added that the next step for his team is to identify the genes that make some individuals respond poorly to these particular antiviral treatments. "By taking blood samples from various patients and using the new method to test for toxicity in the different samples, we hope to discover which individuals will respond well and which will experience mitochondrial reactions, based on their genetic profiles," he said. "That is, we hope to use this method as a step toward truly personalized medicine, opening the door to pre-screening of patients so that those with mitochondrial diseases can be treated with different regimens from the start."

The team members also hope their method will be a means to study toxicity and side effects in other diseases. "Specifically, our technology will illuminate toxicity of a particular class of compounds that interrupts viral RNA synthesis," Cameron said. "While this class of compounds currently is being developed for treatment of HCV, a wide range of other RNA viruses, including West Nile virus, Dengue virus, SARS coronavirus, and perhaps even the Ebola virus, could be treated using this class of compounds as well."

The research was funded by the National Institutes of Health and a Penn State Paul Berg Endowment.

IMAGE
A high-resolution image associated with this research is online at http://www.science.psu.edu/news-and-events/2012-news/Cameron11-2012. 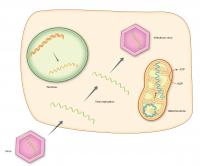 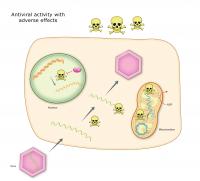 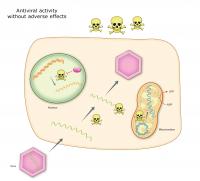