A research team consisting of a University of Arizona graduate student, about 40 middle school students and a UA research lab has undertaken the first systematic study looking at how much plant leaves shrink when they dry out. The results are published in the November issue of the American Journal of Botany, one of the foremost publication venues in the botanical sciences.

"Our simple observation that leaves shrink when they dry out has very important consequences for our understanding how ecosystems work," said Benjamin Blonder, a graduate student in the UA's department of ecology and evolutionary biology who led the research. "Many studies in ecology, especially reconstructions of past climate, depend on knowing how big leaves are. By relying on measurements of dried leaves, a very large number of climate and ecology studies may have obtained biased conclusions."

For example, when scientists reconstruct climate and precipitation in the past to figure out whether an area was subjected to droughts or whether it was wet, they often turn to fossilized leaves, Blonder explained.

According to Blonder, the specific area of a leaf in relation to its mass also is a very useful parameter in predicting how much carbon a plant can capture from the atmosphere.

If leaves undergo dramatic changes in size during fossilization, the conclusions are likely to be off. The same effect would be expected when researchers use dried leaves from museum collections for their calculations.

"People already knew leaves shrink a lot when they're dried out, but we didn't know by how much," Blonder said. "Also, I wanted to know if the shrinkage could be reversed."

So he set out to collect and measure leaves from various areas, including Costa Rica, Hawaii and the Rocky Mountains in Colorado.

"I realized I had more than 100 potential scientists right there in front of me," he said.

"Ben and I had been discussing the possibility of some kind of hands-on research project," said Rebecca Lipson, the middle school science teacher at Miles Exploratory Learning Center, who was partnered with Blonder as a BioME fellow to teach her students ranging from 6th through 8th grade.

Blonder's doctoral advisor Brian Enquist, a professor in the UA department of ecology and evolutionary biology, said he was enthusiastic about the chance to for his lab to help out in Lipson's classroom.

"Ben's enthusiasm for sharing the love of science with young students was infectious," Enquist said. "I am thrilled that we had this opportunity to share and teach science that we do at the UA with such bright and engaged kids."

"I wanted to bring in someone who is a great role model for my students," Lipson said. "Many of them tend to think of a scientist as a dull professor in a white lab coat who never leaves the lab, and I like to shatter that notion. Having a young, passionate grad student in my class helps my students to get an idea of the vast array of what science is really like."

With Blonder as their "principal investigator," or "PI" as they called him, all 105 students in Lipson's four science classes embarked on a quest to find out exactly how much leaves shrink when they dry out, what parameters determine the amount of shrinkage depending on the species, and whether leaves return to their original size once they are rehydrated.

Each class focused on a specific aspect of the research. Blonder and his student collaborators examined leaves from four plant species native to the area and tasked them with determining the effect of a particular treatment.

"My students studied what happened to the leaves when they soaked them in water, immersed them in mud, let them dry out or rehydrated them afterward."

When leaves dry out, they shrink about 20 percent on average, the team discovered. In the most extreme case, the leaves of the mountain meadow-rue (Thalictrum fendleri), an herb from the Rocky Mountains, shriveled down to one-fifth of their original size.

"Through the experiments in the classroom, we found that a leaf comes back to its original size when we soak it in water," Blonder said, "which provides an easy and useful strategy for scientists doing studies that depend on accurate measurements of leaf area."

Delving deeper into the project, the students tried to answer the question of what determines how much a leaf shrinks.

"At the beginning, we thought there would be a very simple explanation," Blonder said. "But it turned out that we ended up with many variables that determine the amount of shrinkage in a leaf of a given species. We used data from hundreds of species, yet there is no simple answer."

The group did find that the amount of structural investment a plant puts into its leaves is a crucial factor determining how much a leaf will shrink when it dries out.

"The more mass and tissue the plant invests into its leaves in terms of components that provide mechanical strength, the less shrinkage will occur," Blonder said.

Almost half of the participating students completed the necessary prerequisites and assignments to qualify as co-authors on the scientific paper that resulted from the study.

"Our school has nearly 40 percent of students that qualify for special needs education services," Lipson explained. "Our philosophy is to target those children who struggle in reading, writing or math and give them opportunities to really engage in their learning and understand concepts a deeper level."

The BioME program has been spearheaded by Judith Bronstein, a University Distinguished Professor in the UA's department of ecology and evolutionary biology, who served as its principal investigator.

"Projects like this one have been hugely beneficial to the Tucson community," Bronstein said, adding that over the course of five years, 52 BioME graduate fellows have engaged tens of thousands of school children in actual research projects.

"The goal has been to expose them to real science, in the sense that you don't know what the answer is. This makes science much more compelling," Bronstein said. "I am not aware of another such program anywhere in the country in which a grad fellow directly involved school children in writing a scientific paper."

Financial cutbacks have led the National Science Foundation to eliminate the program that funded BioME, as well as two other highly successful training programs that place graduate students in Tucson classrooms.

Blonder wants to continue teaching at Miles Exploratory Center. Enquist has been actively applying for alternative funding sources to keep the partnership alive.

"This was such a fun and rewarding experience," Enquist said. "It is important for developing science literacy in our schools that we keep such exchanges going."

"We are very lucky that Dr. Enquist wanted us to continue our partnership in education," Lipson said. "Now that the formal program no longer exists, it will be up to individual students, their advisors and their departments to keep this alive."

"I think we have shown you can work in a school and get serious science published," Lipson said.

Blonder added: "This is a nice example of where science and teaching really do come together to produce a study with real scientific value." 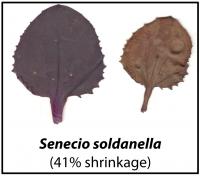 Some Leaves Shrink More Than Others (IMAGE)
view more 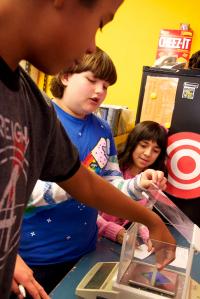