All stars begin their lives in groups. Most stars, including our Sun, are born in small, benign groups that quickly fall apart. Others form in huge, dense swarms that survive for billions of years as stellar clusters. Within such rich and dense clusters, stars jostle for room with thousands of neighbors while strong radiation and harsh stellar winds scour interstellar space, stripping planet-forming materials from nearby stars.

It would thus seem an unlikely place to find alien worlds. Yet 3,000 light-years from Earth, in the star cluster NGC 6811, astronomers have found two planets smaller than Neptune orbiting Sun-like stars. The discovery, published in the journal Nature, shows that planets can develop even in crowded clusters jam-packed with stars.

"Old clusters represent a stellar environment much different than the birthplace of the Sun and other planet-hosting field stars," says lead author Soren Meibom of the Harvard-Smithsonian Center for Astrophysics (CfA). "And we thought maybe planets couldn't easily form and survive in the stressful environments of dense clusters, in part because for a long time we couldn't find them."

The two new alien worlds appeared in data from NASA's Kepler spacecraft. Kepler hunts for planets that transit, or cross in front of, their host stars. During a transit, the star dims by an amount that depends on the size of the planet, allowing the size to be determined. Kepler-66b and Kepler-67b are both less than three times the size of Earth, or about three-fourths the size of Neptune (mini-Neptunes).

Of the more than 850 known planets beyond our solar system, only four - all similar to or greater than Jupiter in mass - were found in clusters. Kepler-66b and -67b are the smallest planets to be found in a star cluster, and the first cluster planets seen to transit their host stars, which enables the measurement of their sizes.

Meibom and his colleagues have measured the age of NGC 6811 to be one billion years. Kepler-66b and Kepler-67b therefore join a small group of planets with precisely determined ages, distances, and sizes.

Considering the number of stars observed by Kepler in NGC 6811, the detection of two such planets implies that the frequency and properties of planets in open clusters are consistent with those of planets around field stars (stars not within a cluster or association) in the Milky Way galaxy.

"These planets are cosmic extremophiles," says Meibom. "Finding them shows that small planets can form and survive for at least a billion years, even in a chaotic and hostile environment." 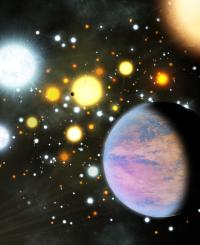