Scientists at Washington University School of Medicine in St. Louis have found a way that corrupted, disease-causing proteins spread in the brain, potentially contributing to Alzheimer's disease, Parkinson's disease and other brain-damaging disorders.

The research identifies a specific type of receptor and suggests that blocking it may aid treatment of theses illnesses. The receptors are called heparan sulfate proteoglycans (HSPGs).

"Many of the enzymes that create HSPGs or otherwise help them function are good targets for drug treatments," said senior author Marc I. Diamond, MD, the David Clayson Professor of Neurology. "We ultimately should be able to hit these enzymes with drugs and potentially disrupt several neurodegenerative conditions."

The study is available online in the Proceedings of the National Academy of Sciences.

Over the last decade, Diamond has gathered evidence that Alzheimer's disease and other neurodegenerative diseases spread through the brain in a fashion similar to conditions such as mad cow disease, which are caused by misfolded proteins known as prions.

Proteins are long chains of amino acids that perform many basic biological functions. A protein's abilities are partially determined by the way it folds into a 3-D shape. Prions are proteins that have become folded in a fashion that makes them harmful.

Prions spread across the brain by causing other copies of the same protein to misfold.

Among the most infamous prion diseases are mad cow disease, which rapidly destroys the brain in cows, and a similar, inherited condition in humans called Creutzfeldt-Jakob disease.

Diamond and his colleagues have shown that a part of nerve cells' inner structure known as tau protein can misfold into a configuration called an amyloid. These corrupted versions of tau stick to each other in clumps within the cells. Like prions, the clumps spread from one cell to another, seeding further spread by causing copies of tau protein in the new cell to become amyloids.

In the new study, first author Brandon Holmes, an MD/PhD student, showed that HSPGs are essential for binding, internalizing and spreading clumps of tau. When he genetically disabled or chemically modified the HSPGs in cell cultures and in a mouse model, clumps of tau could not enter cells, thus inhibiting the spread of misfolded tau from cell to cell.

Holmes also found that HSPGs are essential for the cell-to-cell spread of corrupted forms of alpha-synuclein, a protein linked to Parkinson's disease.

"This suggests that it may one day be possible to unify our understanding and treatment of two or more broad classes of neurodegenerative disease," Diamond said.

"We're now sorting through about 15 genes to determine which are the most essential for HSPGs' interaction with tau," Holmes said. "That will tell us which proteins to target with new drug treatments."

Receptor may aid spread of Alzheimer's and Parkinson's in brain 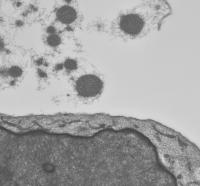