Researcher Thomas J. Kipps, MD, PhD, professor of medicine and deputy director of research operations at UC San Diego Moores Cancer Center, is principal investigator for one of six "Disease Team" awards approved December 12 by the governing board of the California Institute for Regenerative Medicine (CIRM). The grant, for $4.18 million, is part of a total $61 million awarded to fund work which promises to move therapies out of the lab and into clinical trials in patients.

The funding was approved by the stem cell agency's governing board, the Independent Citizen's Oversight Committee (ICOC), at a two-day meeting in Los Angeles.

The UC San Diego research team's goal is to develop new therapies that specifically target a protein found only on the surface of cancer stem cells. The protein, called Receptor-tyrosine-kinase-like Orphan Receptor 1 or ROR1, is produced in great amounts during embryogenesis, when it helps regulate early muscle and skeletal development. Later, ROR1 is turned off. Normal cells and tissues in adults do not typically express ROR1.

But multiple types of cancer stem cells do, co-opting ROR1 to promote their growth and survival. In fact, Kipps and colleagues have found that exploitation of ROR1 by cancer cells is critical to the disease's spread or metastasis, estimated to be responsible for 90 percent of cancer-related deaths.

"Because this antibody does not bind to normal cells, it can serve as the 'magic bullet' to deliver a specific hit to cancer stem cells," the researchers said in their CIRM proposal.

They plan to conduct clinical trials with the antibody, first in patients with chronic lymphocytic leukemia, the most common type of blood cancer in the United States, to determine appropriate dose levels and safety protocols, followed by clinical trials involving patients with other types of cancer, including solid tumor types like breast and lung.

"We will investigate the potential for using this antibody to deliver toxins selectively to cancer stem cells," the researchers wrote. "This selective delivery could be very active in killing cancer stem cells without harming normal cells in the body because they lack expression of ROR1. With this antibody, we can develop curative stem-cell-directed therapy for patients with any one of many different types of currently intractable cancers."

The CIRM Disease Team awards are designed to encourage multidisciplinary teams of researchers from academic institutions, medical centers and industry to work together and to develop new treatments for a broad range of therapies. The recipients were selected from 14 applications, all of which were reviewed by an independent group of internationally renowned scientists. 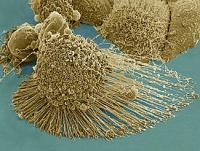