According to ABC News Channel 24 in Australia: "The Country Fire Service is battling several bushfires across South Australia, one of which threatened a house." All of the fires are bushfires which are being fueled by grass and detritus. As the record temperatures in South Australia soar, it is not uncommon for these fires to break out. The Newcastle Herald reported that: "Country Fire Service was expecting Friday to be the toughest day yet in the heatwave that has blanketed South Australia in 40+ (104+ F) degree weather since Monday." In addition, the weather bureau does not have good news for the firefighters and residents around the fire. Strong winds and hot, dry conditions are continuing throughout the region.

Newcastle Herald also reported: "Country Fire spokeswoman Connie Hassouros said a blaze 32 kilometres north of Ceduna in the Yumbarra Conservation Park was created by a series of complex fires that were proving difficult to control because of their rural location." Queensland and Victoria have provided five additional water bombers to aid South Australia's fleet of 17 aircraft which are being sent across the state as needed.

This natural-color satellite image was collected by the Moderate Resolution Imaging Spectroradiometer (MODIS) aboard the Aqua satellite on January 16, 2014. Actively burning areas, detected by MODIS's thermal bands, are outlined in red. 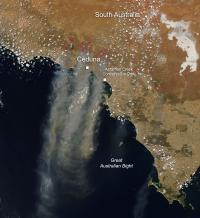