NASA satellite data was an "eye opener" when it came to Tropical Cyclone 15S, now known as Guito in the Mozambique Channel today, Feb. 19, 2014. NASA's Aqua satellite passed over Guito and visible imagery revealed a ragged eye had developed as the tropical cyclone intensified.

The Moderate Resolution Imaging Spectroradiometer or MODIS instrument aboard NASA's Aqua satellite captured a visible image of Tropical Cyclone Guito on Feb. 19 at 1140 UTC/6:40 a.m. EST as it continued moving south through the Mozambique Channel. The image revealed a ragged-looking eye with a band of strong thunderstorms wrapping from the northwestern to the southeastern quadrants of the storm.

The Joint Typhoon Warning Center or JTWC noted that a mid-latitude trough (elongated area) of low pressure is approaching Guito from the southwest. That trough is expected to cause Guito to recurve southeastward as the storm transitions into an extra-tropical storm over the next couple of days. 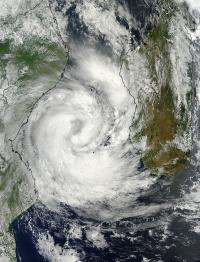