An international team of researchers in cooperation with the University of Bonn has taken two "snapshots" of a receptor which are of critical importance for blood coagulation. The scientists now hope to be able to develop novel drugs using these results. These include tailor-made blood-thinning substances for heart attack and stroke patients whose effects are reversible and better controllable than those of current therapies. The researchers are presenting their results in the renowned journal "Nature."

After a cut to the finger, blood platelets come into play: they adhere to one another and thus close the wound. The adenosine diphosphate receptor P2Y12, found on the surface of platelets, plays an important role in this essential mechanism. It belongs to the family of so-called G-protein-coupled receptors (GPCR); two American researchers were awarded the Nobel prize in 2012 for research involving these receptors. "If adenosine diphosphate (ADP) binds to the receptor, signals are transmitted to the inside of the cell which will finally lead to platelet aggregation," said Prof. Dr. Christa Müller from the Pharma-Center of the University of Bonn. In this process, the receptor and its binding partner ADP fit together precisely like a lock and a key. "The ADP can be thought of as a key which unlocks the receptor (the "lock") to allow the signal for platelet aggregation to pass," explains the pharmacist.

Better control through a reversible blockade

However, platelet aggregation is sometimes undesired. For example, in the case of a heart attack or a stroke aggregated platelets occlude important blood vessels. As a preventive medicine blood thinners are generally prescribed to such patients, in order to prohibit further damage due to occluded blood vessels. Pills containing the drug clopidogrel, that must be initially activated in the liver, are of great importance, since it blocks the P2Y12 receptor and thus prevents platelet aggregation. Since clopidogrel is an irreversible inhibitor, only with the formation of new platelets after approximately one to two weeks, this effect subsides in the patients.

"An effective, direct, reversible blockade of the receptor would be desirable to be able to better control aggregation and prevent overdose," said Prof. Müller. Also, if a patient treated with clopidogrel meets with an accident, a drug which can quickly detach from the receptor would be advantageous. This would prevent the injured patient from hemorrhaging due to the previously administered blood thinner. Such drugs are being developed, but so far all of them appear to show unwanted side-effects.

Two "snapshots" show the mode of operation of the receptor

"To date, it has not been understood well how exactly the receptor works according to the lock-and-key principle," stated Prof. Müller. "However, this is an important precondition for developing such a reversible, highly effective and, at the same time well tolerated drug with few adverse effects, for the prevention of platelet aggregation." In an international team under the direction of Chinese colleagues from Shanghai and together with US researchers from Bethesda and La Jolla, the pharmacist was able to take two "snapshots" of the receptor with the help of X-ray structural analysis: once in the "unlocked" state, when a suitable binding partner ensures signal transmission in the platelet. The other shot shows the P2Y12 receptor in the blocked - "locked" - state. This shot has recently been published online in a "Nature" publication.

Both publications will appear in the printed edition of "Nature" in direct succession. "Using these two images, we can now envisage how the receptor protein's conformation is changed during unlocking," said Prof. Müller. This knowledge will also allow the design of new drugs, which selectively and reversibly block the receptor.

"However, further intensive research is needed until such new drugs will come onto the market," said the pharmacist from the University of Bonn. Since there are many receptors with very similar properties, the research into the P2Y12 receptor gives hope for other applications. Thus the related P2Y2 receptor is, for example, involved in the metastasis of tumor cells. "Here, too, new options for cancer research could arise," said the pharmacist with an optimistic view towards the future.

Hope for better drugs to treat stroke and heart attacks 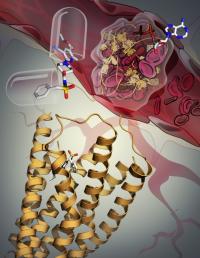