Acute pancreatitis involves the pancreas digesting itself resulting in severe abdominal pain, vomiting and systemic inflammation. Every year in the UK around 20,000 patients are diagnosed with the disease resulting in 1000 deaths. There is no immediate cure and treatment is restricted to intravenous fluid and nutritional support.

Dr Jason Bruce, from the Faculty of Life Sciences, who led the research, said "The major causes of pancreatitis include bile acid reflux from gall stones and excessive alcohol intake combined with a high fat diet. In fact, the incidence of acute pancreatitis significantly increases during the Christmas period when alcohol and fat consumption is at its highest amongst the general population. When alcohol and fat accumulate inside pancreatic acinar cells -- the cells that secrete digestive enzymes into the gut -- the resulting small molecules called metabolites deplete cellular energy levels and increase cellular calcium. This causes uncontrolled and catastrophic cell death and the cells burst, releasing their toxic enzymes which digest the pancreas and surrounding tissue."

However, recent research from Dr Bruce's laboratory published in the Journal of Biological Chemistry, shows that insulin, which is normally released from the beta cells of the pancreas, prevents these toxic effects of alcohol and fatty acid metabolites.

Dr Bruce and his team decided to look at insulin because it has been used successfully to treat obese pancreatitis patients by reducing fatty acids in the blood. Diabetes makes pancreatitis worse and diabetics are at higher risk of developing pancreatitis and multiple organ failure. Moreover the incidence of pancreatitis is reduced in diabetics that receive insulin. Although tenuous, these studies suggested that insulin might have a protective role, however, it remained unclear how insulin was working. What makes the Manchester research unique is that it provides the first evidence that insulin directly protects the acinar cells, which is where the disease is initiated.

Dr Bruce explains: "Insulin works by restoring the energy levels of pancreatic acinar cells, which fuels the calcium pumps on the membrane of these cells. These calcium pumps help to restore cellular calcium and prevent the catastrophic cell death and autodigestion of the pancreas."

He continues: "Although more research is needed to confirm that insulin works in animal models and human clinical trials, this study suggests that combined with tight control over blood glucose insulin may be an effective treatment for pancreatitis. Furthermore, if we can better understand how insulin works, then we might be able to design new and more effective drugs that might one day provide the first curative treatment for this disease"

Insulin offers new hope for the treatment of acute pancreatitis 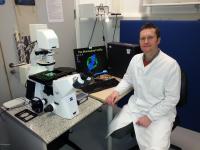