COLUMBUS, Ohio - A new, implantable device to control heart failure is showing promising results in the first trial to determine safety and effectiveness in patients, according to lead researcher Dr. William Abraham of The Ohio State University Wexner Medical Center.

Results of the study are published in the Journal of American College of Cardiology Heart Failure.

"Heart failure is one of the fastest growing forms of heart disease and it's one of the most common reasons people are hospitalized," said Abraham, director of the Division of Cardiovascular Medicine at Ohio State's Wexner Medical Center. "The optimal drug therapies we have today often aren't enough to manage this disease for some patients, so we are always looking for new types of therapies."

Abraham and other cardiovascular researchers at seven U.S. centers examined an extra-aortic counterpulsation system called C-Pulse, made by Sunshine Heart Inc. It's a cuff that wraps around the aorta and syncs with the patient's heartbeat, rapidly inflating and deflating a small balloon to help squeeze blood through the aorta to circulate throughout the body. It's powered through a wire that exits the abdomen and connects to an external driver worn by the patient. The driver can be plugged in or battery-powered.

In the pilot study, 20 patients with New York Heart Association (NYHA) functional class III or ambulatory functional class IV heart failure were implanted with the device. Patients were evaluated at six months and one year. At both times, 16 of the patients showed significant improvements in NYHA functional class.

"At the one year mark, three of the patients had mild or no symptoms of heart failure. They went from class III or IV down to a functional class I, effectively reversing their heart failure," Abraham said.

Additionally, patients were able to walk an average 100 feet farther during standardized measures and average quality of life scores improved nearly 30 points. "Drug and device therapies that are currently available for heart failure improve that same quality of life score by only five or 10 points. So, this is truly a significant improvement," Abraham said.

The most common adverse effect during the trial was infection of the exit site, experienced by 8 out of 20 participants. Researchers noted that stricter guidelines for exit site management, wound care and antibiotic therapy could reduce that risk in future studies.

There were no hospitalizations among the participants for stroke, thrombosis, sepsis or bleeding, which often occurs in patients using left ventricular assist devices (LVADs). The researchers said this is due to the device remaining outside the bloodstream. Another important difference is the C-Pulse device can be temporarily turned off and disconnected, allowing patients some conveniences that an LVAD doesn't permit.

Researchers are now conducting a randomized, controlled trial of this device at Ohio State's Ross Heart Hospital and 18 other academic medical centers across the country. For more information, go to clinicaltrials.gov.

This study was funded by Sunshine Heart Inc., and Abraham has received consulting fees from the company. 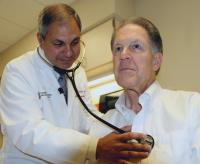 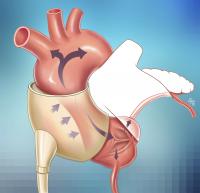