That paradox has been resolved in newly published research conducted by Michael Singer and Katerina Michaelides, associate researchers at UC Santa Barbara's Earth Research Institute. The pair show that simple topography in dryland channels is maintained by complex interactions among rainstorms, the stream flows these storms generate in the river channel and sediment grains present on the riverbed. Their findings appear today in the journal Geology.

Desert streams flow only during infrequent but intense rainstorms, and when they do, only parts of the channel contain water, making the flow irregular and erratic. One rainstorm may erode sediment grains in one section of the channel, while another storm moves sediment in a different area.

"Given this localized sediment movement during rainstorms, one might expect desert channels to contain mounds of sediment that undulate down the stream course reflecting the irregular flow, but they don't," Singer said. "The water produced in the channel only flows partially down the stream and then stops because it seeps into the riverbed, and there's not enough water from upstream to replace it, so it just disappears."

Because desert river channels do not feature the river bars, pools or riffles common in perennial streams, they decline in elevation downstream very smoothly. According to the researchers' findings, feedback between two variables -- complex water and sediment movements -- shapes such basins.

Singer and Michaelides used data collected from the Rambla de Nogalte in southeastern Spain to model these dryland channel variables. The area has a semi-arid climate with mean annual rainfall of around 14 inches, which occurs during convective rainstorms, producing large floods that recur about once a decade.

They found that dryland channel width fluctuates downstream. Their observations show that grain size (roughness) also fluctuates from sand to gravel in a downstream direction.

"There's feedback between this fluctuating width and fluctuating grain size," Singer said. "The stream flow is generated in a discontinuous pattern along the channel. Some rainstorms produce a bit of topography in some parts of the channel. Other spatial configurations of flow generated by storms destroy that topography so the variability of the rainstorms interacting with this channel are creating and destroying the topography constantly to keep it in this simple form."

Singer and Michaelides also produced simulations of extreme flows to determine the volume of flow necessary to reshape the channel completely. They examined the longitudinal variability of sediment flow as well as sediment storage to find the channel-shaping threshold. This threshold reshapes the entire channel and makes it smooth again. "It's a really significant threshold that tells us the magnitude of the flood necessary to reshape the channel," Singer said.

"Semi-arid and arid river systems are extremely important to the populations that live around them," he concluded. "Water resources are obviously a huge limitation in the development of societies, and a lot of water is being progressively diverted for irrigation, water use and other purposes, so those can further affect the spatial patterns of where flow is in these channels and potentially impact the processes of where topography develops in the river channel. Humans can inadvertently have an impact on the shape and form of river channels like these." 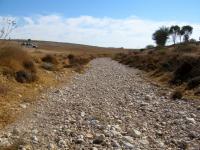 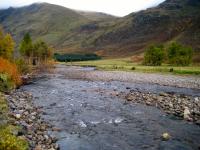