Nature has many examples of self-assembly, and bioengineers are interested in copying or manipulating these systems to create useful new materials or devices. Amyloid proteins, for example, can self-assemble into the tangled plaques associated with Alzheimer's disease -- but similar proteins can also form very useful materials, such as spider silk, or biofilms around living cells. Researchers at UC Davis and Rice University have now come up with methods to manipulate natural proteins so that they self-assemble into amyloid fibrils. The paper is published online by the journal ACS Nano.

"These are big proteins with lots of flat surfaces suitable for functionalization, for example to grow photovoltaics or to attach to other surfaces," said Dan Cox, a physics professor at UC Davis and coauthor on the paper. They could be used as "scaffolding" for tissue engineering, and potentially could be programmed so that other particles or proteins could be attached in specific locations or arrays. Amyloids are also tough: they can withstand boiling, attack by digestive proteins and ultraviolet radiation.

Maria Peralta, a graduate student in chemistry at UC Davis, and colleagues made the amyloid fibrils by tweaking natural "antifreeze" proteins from ryegrass and an insect, spruce budworm. These proteins allow some plants and animals to withstand very cold temperatures by preventing the growth of ice crystals, but they do not naturally self-assemble into larger structures.

The researchers removed cap structures from the end of the antifreeze proteins. They were then able to let them self-assemble into fibrils with predictable heights, a potential new material for bioengineering.

The project was funded by the Research Investments in Science and Engineering program, established by the UC Davis Office of Research to seed large-scale interdisciplinary research efforts on campus. In addition to Cox and Peralta, the team included Arpad Karsai, Alice Ngo, Catherine Sierra, Kai Fong, Xi Chen, Gang-yu Liu and Michael Toney in the UC Davis Department of Chemistry; N. Robert Hayre, Nima Mirzaee, Krishnakumar Ravikumar and Rajiv Singh in the Department of Physics; and Alexander Kluber at Rice University, Houston. Several authors are also affiliated with the Institute for Complex Adaptive Matter, based at UC Davis. 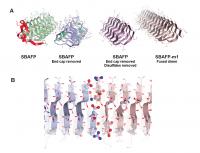