PHILADELPHIA - There may be two new ways to fight AIDS -- using a heat shock protein or a small molecule - to attack fibrils in semen associated with the human immunodeficiency virus (HIV) during the initial phases of infection, according to new research from the Perelman School of Medicine at the University of Pennsylvania. HIV is most commonly transmitted between individuals in semen, the male reproductive fluid, which contains deposits of protein fragments called amyloid fibrils. These fibrils can increase the transmission of HIV by helping the virus attach to the membrane surrounding human cells. The scientists surmise that therapies that reduce the levels of amyloid fibrils in semen might be able to reduce the transmission of HIV.

"Each strategy diminished the ability of amyloid to promote HIV infection, so this approach has potential as a therapeutic," Shorter said. The work was a team effort driven by lead author Laura Castellano, PhD, who obtained her doctoral degree in the Shorter lab, and coauthor Drew Weissman, MD, PhD, a professor of Medicine in the division of Infectious Diseases.

Another paper, published today in the journal eLife, by Shorter, Castellano and their collaborators at Ulm University Medical Center, Germany, including Jan Münch and Edina Lump, describes a second approach - a small molecule that also disrupts amyloids in semen that promote HIV infection. However, this molecule, called CLR01, also attacks the virus itself.

Tweezers-shaped CLR01 can both disrupt fibril formation and disassemble fibrils that have already formed. CLR01 prevents HIV particles from interacting with fibrils by disrupting the membranes that surround the virus particles and can displace the virus particles that have already bound to the fibrils. In the presence of CLR01, human cells exposed to semen that contained HIV were at least 100-fold less likely to become infected with the virus.

The next step could be to assess safety and efficacy in non-human primates. "We think that CLR01 could be more effective than other microbicides that are in development because of its dual action, its safety in terms of side effects and its potential broad application," Shorter said.

Reference: The paper 'A molecular tweezer antagonizes seminal amyloids and HIV infection' can be freely accessed online at http://dx.doi.org/10.7554/eLife.05397 Contents, including text, figures, and data, are free to re¬use under a CC BY 4.0 license.

Penn Medicine is one of the world's leading academic medical centers, dedicated to the related missions of medical education, biomedical research, and excellence in patient care. Penn Medicine consists of the Raymond and Ruth Perelman School of Medicine at the University of Pennsylvania (founded in 1765 as the nation's first medical school) and the University of Pennsylvania Health System, which together form a $4.3 billion enterprise.

The Perelman School of Medicine has been ranked among the top five medical schools in the United States for the past 17 years, according to U.S. News & World Report's survey of research-oriented medical schools. The School is consistently among the nation's top recipients of funding from the National Institutes of Health, with $392 million awarded in the 2013 fiscal year.

Penn Medicine is committed to improving lives and health through a variety of community-based programs and activities. In fiscal year 2013, Penn Medicine provided $814 million to benefit our community.

Targeting HIV in semen to shut down AIDS

University of Pennsylvania School of Medicine 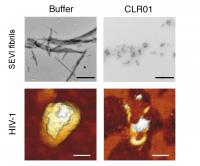