Why do we get fat and why is it so difficult for so many people to keep off excess weight? Researchers in the Reseach Unit Neurobiology of Diabetes led by Dr. Paul Pfluger and at the Institute for Diabetes and Obesity led by Prof. Dr. Matthias Tschöp have now identified a new component in the complex fine-tuning of body weight and food intake. They found that the enzyme histone deacetylase 5 (HDAC5) has a significant influence on the effect of the hormone leptin*. This hormone plays a crucial role in triggering satiety and thus on how the body adapts to a changing food environment.

Pfluger describes the results as follows: "HDAC5 is an important link in the communication between our fat tissue and hunger centers in the brain." Initial experiments have shown that the production and activity of HDAC5 in our control center for energy balance, the hypothalamus, is increased by a high-fat diet, by enlarged fat deposits and by the satiety hormone leptin. Dhiraj Kabra, first author of the study, added: "HDAC5 is a molecular switch in the brain that helps the body to recognize how full the fat depots are. Without HDAC5, we cannot adapt our food intake or curb our fat deposition."

Disruption of the signaling pathway leads to obesity

According to the scientists, mice unable to produce HDAC5 respond significantly worse to leptin - a condition referred to as leptin resistance. They show a continuously increased food intake and - in comparison to mice with intact HDAC5 - show increased obesity, i.e. they get fat. Through targeted activation of HDAC5 the team was able to reverse this effect, and thereby enabling obese animals to loose fat mass and body weight.

"The restoration of leptin sensitivity is an important step on the path towards sustainable weight loss and towards combating potential sequelae of obesity such as type 2 diabetes," said study leader Pfluger. "In addition to the essential changes in diet and exercise behavior, in the future the individual components of the leptin effect could be potential drug targets to support the weight loss process." One of these essential components - HDAC5 - has already been identified. "However," Pfluger concluded, "it remains to be seen in the coming years whether this enzyme will be a suitable target for combating obesity in humans."

Leptin is secreted by fat tissue in direct correlation to body fat mass, thereby signaling to neurons in the brain that the fat stores are full. This leads to a negative energy balance whereupon the body reduces food intake, which ultimately leads to a reduction of body weight and fat storage. As a consequence, in the reduced fat stores less leptin is released, food intake is increased, and the fat stores and body weight are increased.

Specifically, the researchers showed that HDAC5 deacetylates the transcription factor STAT3, whereupon STAT3 can migrate to the leptin receptor. If STAT3 is phosphorylated (activated) there, it migrates back to the cell nucleus and binds to the DNA to activate gene and behavior programs that ultimately cause the reduction of food intake. If HDAC5 is absent (such as here after genetic deletion), STAT3 accumulates as hyper-acetylated and thus inactive protein in the cell nucleus. The leptin signaling pathway is thus switched off, subsequently suppressing the feeling of satiety. This study describes for the first time a direct interaction of the two molecules.

Technische Universität München (TUM) is one of Europe's leading research universities, with around 500 professors, 10,000 academic and non-academic staff, and 36,000 students. Its focus areas are the engineering sciences, natural sciences, life sciences and medicine, reinforced by schools of management and education. TUM acts as an entrepreneurial university that promotes talents and creates value for society. In that it profits from having strong partners in science and industry. It is represented worldwide with a campus in Singapore as well as offices in Beijing, Brussels, Cairo, Mumbai, and São Paulo. Nobel Prize winners and inventors such as Rudolf Diesel and Carl von Linde have done research at TUM. In 2006 and 2012 it won recognition as a German "Excellence University." In international rankings, it regularly places among the best universities in Germany. http://www.tum.de/en/homepage/

The Institute of Diabetes and Obesity (IDO) studies the diseases of the metabolic syndrome by means of systems biological and translational approaches on the basis of cellular systems, genetically modified mouse models and clinical intervention studies. It seeks to discover new signaling pathways in order to develop innovative therapeutic approaches for the personalized prevention and treatment of obesity, diabetes and their concomitant diseases. IDO is part of the Helmholtz Diabetes Center (HDC). http://www.helmholtz-muenchen.de/en/ido/index.html

The Research Unit 'NeuroBiology of Diabetes' (NBD) at Helmholtz Zentrum München studies the role of the central nervous system (CNS) as potential common denominator for obesity and diabetes type 2. NBD, which is associated with the IDO and part of the HDC and DZD, aims to understand the exact molecular underpinnings for leptin resistance and weight cycling and our adaptive physiological response to changes in the environment. http://www.helmholtz-muenchen.de/nbd

The German Center for Diabetes Research (DZD) is a national association that brings together experts in the field of diabetes research and combines basic research, translational research, epidemiology and clinical applications. The aim is to develop novel strategies for personalized prevention and treatment of diabetes. Members are Helmholtz Zentrum München - German Research Center for Environmental Health, the German Diabetes Center in Düsseldorf, the German Institute of Human Nutrition in Potsdam-Rehbrücke, the Paul Langerhans Institute Dresden of the Helmholtz Zentrum München at the University Medical Center Carl Gustav Carus of the TU Dresden and the Institute for Diabetes Research and Metabolic Diseases of the Helmholtz Zentrum München at the Eberhard-Karls-University of Tuebingen together with associated partners at the Universities in Heidelberg, Cologne, Leipzig, Lübeck and Munich. http://www.dzd-ev.de/en/index.html 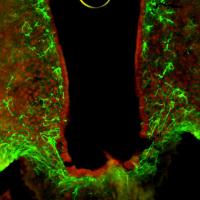