The hepatitis B virus (HBV), which is up to 100 times more infectious than HIV, is primarily transmitted through blood or other bodily fluids. HBV infects liver cells and chronic infection can lead to serious health problems such as cirrhosis or liver cancer. According to the World Health organization, chronic hepatitis B affects nearly 240 million people worldwide, killing almost 800,000 people a year. Drugs are available to treat HBV, but they rarely cure the infection, and so the virus typically returns after the treatment ends. In a study published in Nature this week, an international team led by researchers from the Faculty of Medicine at the University of Geneva (UNIGE), Switzerland, discovered how our cells defend themselves against HBV infection, but also how the virus fights back. This work represents an important advance in our understanding of HBV and suggests new avenues for the development of innovative therapeutic agents.

A protective host protein destroyed by the virus X protein

Our cells produce a large number of defence proteins to protect us from viruses. These so-called «restriction factors» are a first line of defence against viral infections, and constitute an important component of the innate immune response. However, little is known about how our cells defend themselves against HBV, and which restriction factors (if any) are involved.

After infecting liver cells, the circular HBV genome travels to the cell nucleus, where it is remains, as a circle, independent from the cell chromosomes. But what happens next? This is what Professor Michel Strubin, a microbiologist at the Faculty of Medicine at UNIGE, in collaboration with the University of Lyon (France) and Gilead Sciences, Inc. (Foster City, California, USA), discovered. Their work revealed that a host protein complex (Smc5/6) recognizes the HBV genome and then acts as a restriction factor to prevent the production of new viruses.

But the virus knows how to defend itself. «If the story ended there, the virus would no longer exist. It would be without counting on its remarkable adaptability» explains Michel Strubin. «The virus counterattacks by producing a small protein, called the X protein, whose function is destroy Smc5/6. It has the ability to bring this restriction factor to a part of the cell that acts as a trash can, and gets rid of it.» With Smc5/6 gone, new viral particles can then be produced to infect neighbouring cells.

This work raises the possibility of developing new therapeutic agents that target the X protein and prevent the virus escaping from liver cell defences. «Understanding this mechanism provides new therapeutic possibilities. Research continues to apply this fundamental discovery to the development of innovative drugs that could inhibit the X protein» highlights Dr. Simon Fletcher, from Gilead Sciences, Inc., whose team provided the in vivo verification of the discoveries made by the University of Geneva microbiologists.

Moreover, this mechanism could apply to other viruses. Indeed, the herpes viruses or the human papillomavirus -- which can cause cervical cancer -- have, just like HBV, circular genomes that are independent from the cell chromosomes. The researchers are now working to determine if Smc5/6 can target these viruses and, in turn, whether the viruses fight back. If so, preventing viral proteins from destroying Smc5/6 may be a useful strategy to prevent a variety of diseases which adversely affect the health of millions of people worldwide.

Counterattack of the hepatitis B virus 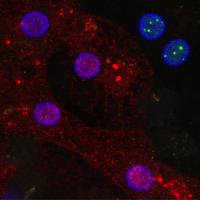