The flu and other viral infections have long been known to cause mood changes, beyond the more familiar symptoms of fever and sore throat. A study in mice, published April 19, 2016 in Immunity, now reveals how the antiviral immune response alters brain activity. Upon infection, brain cells lining blood vessels produce a protein called CXCL10, which impairs neuronal firing in the hippocampus -- a brain region important in learning, memory, and mood.

"Cognitive dysfunction occurs frequently in RNA virus-infected individuals, as well as after treatment with type I interferons for autoimmune disorders and certain types of cancer, yet the underlying signaling pathways and cell types involved were not known until now," says first study author Thomas Blank of the University of Freiburg. "We identified brain endothelial and epithelial cells (which line the interior surfaces of blood vessels or ventricles, respectively) as natural gate-keepers for virus-induced sickness behavior, and established a potential target for the treatment of behavioral changes during virus infection or type I interferon therapy."

Viral infections frequently cause mood changes such as depressive-like behavior, cognitive deficits, sleepiness, headache, and a general feeling of malaise. Similarly, antiviral molecules called type I interferons, which are naturally released after infection to prevent viral replication and used therapeutically to treat cancer, hepatitis C virus infection, and multiple sclerosis, can cause depressive-like symptoms such as fatigue, insomnia, irritability, and loss of appetite, as well as cognitive changes. Although there is clear evidence that the immune system can affect psychological and cognitive function, the underlying mechanisms have been unclear.

To address this question, Thomas Blank and Marco Prinz of the University of Freiburg infected mice with the vesicular stomatitis virus, which causes flu-like symptoms in humans, and then assessed their depressive-like behavior in the forced swim test. Viral infection caused an increase in the duration of animals' immobility response--a behavioral sign of despair. This depressive-like behavior required the activation of the CXCL10/CXCR3 signaling pathway. CXCL10 released from brain endothelial and epithelial cells bound to neuronal CXCR3, which, in turn, impaired the activity of neurons in the hippocampus.

Taken together, the findings reveal the importance of brain endothelial and epithelial cells in the communication between the immune system and the central nervous system, acting as a switchboard that translates incoming signals from the periphery to the brain. Similarly, the study suggests that the CXCL10/CXCR3 signaling pathway acts as a bridge between rising interferon levels in the blood and changes in neuronal activity in the brain, explaining how virus infection or type I interferon treatment causes mood changes.

"In future studies, we will further explore the molecular and cellular changes underlying viral sickness behavior," Blank says. "In the meantime, our findings suggest that preventing the release of CXCL10 or blocking its receptors at an early phase should eliminate at least the initial stages of sickness behavior seen in response to viral infection or type I interferon therapy."

The authors were supported by the BMBF-funded competence network of multiple sclerosis, the competence network of neurodegenerative disorders, the DFG, the Fritz-Thyssen Foundation, the ERA-Net NEURON initiative "NEUROIFN," the Gemeinnützige Hertie Foundation, a Marie Curie Integration Grant, the SFB, the Niedersachsen-Research Network on Neuroinfectiology of the Ministry of Science and Culture of Lower Saxony, Germany. Mouse IFN-β was supplied by Biogen Inc. Co-author Darren Baker is an employee of Biogen Inc. and owns company stock. 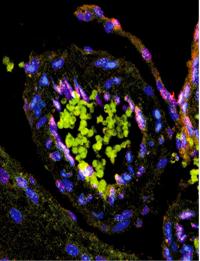